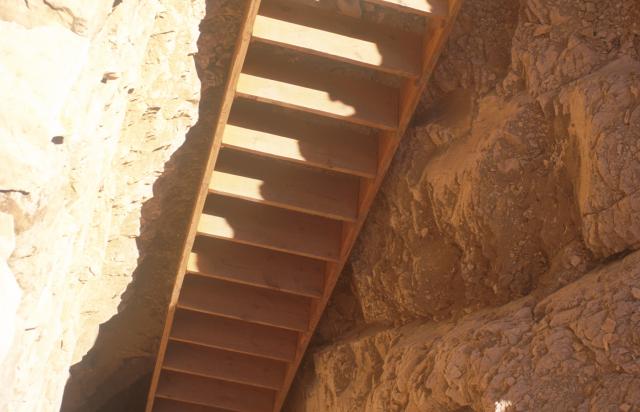 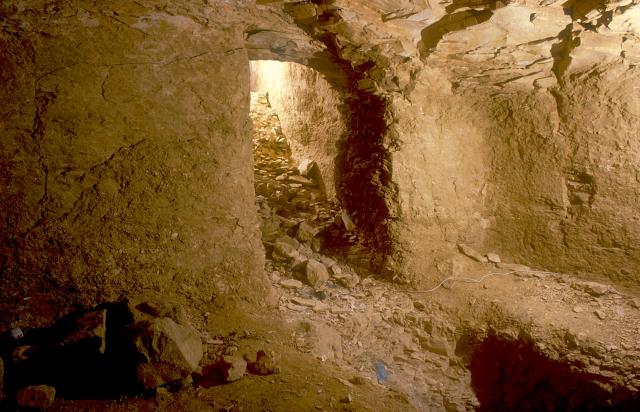 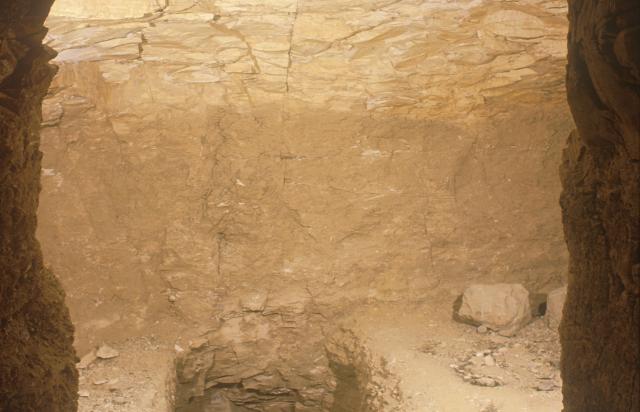 The entrance is well-concealed at the base of a cleft in the cliff face. The entry stairs are poorly preserved and descend to a small gate. The cliff wall above the entrance is simply smoothed over. Foundation deposits were found before the entrance by Carter in 1919.

There has been damage to the lintel, soffit and left (south) jamb of the gate.

The original surface of the ceiling has collapsed and the walls are not well squared. The corridor bends gradually to the left.

This roughly cut chamber has suffered ceiling collapse. A steep staircase descends through the floor to the left (south) of center.

The upper two-thirds of the descent is stepped; the lower third is a roughly cut ramp.

The soffit is level.

The gate is now only a rough opening due to the collapse of the bedrock.

The cartouche-shaped burial chamber originally contained a single, square pillar in the middle of the chamber. No traces now remain, but it was remarked upon by Loret. To the rear of the chamber was the quartzite sarcophagus with a canopic chest emplacement at its foot. A side chamber lies to the left (south). Remnants of faded plaster with traces of a decorative kheker frieze visible beneath the ceiling show that the chamber was decorated. In the 1899 clearance of the tomb, fragments of limestone slabs, inscribed with the Imydwat, were found. They are similar to those discovered in KV 20, and are now in the Egyptian Museum, Cairo.

The lintel and upper jambs of this gate are broken. This damage increased recently after the 1994 floods. No jambs or thicknesses are discernible on the gate, which has suffered structural damage.

This small side chamber is trapezoidal in plan. There has been damage from flooding that caused ceiling collapse and wall breakage. Dynasty 18 sherds litter the floor.

The tomb lies at the bottom of Al Qurn, in the southwest branch of the southwest wadi, where it is flanked by the tombs of Tausert and Setnakht (KV 14) and Sety II (KV 15). The plan of the tomb is simple, consisting of a steep corridor (B) which opens into a small, unevenly cut chamber (C). A steep descent (C) leads down from the center of this chamber to the burial chamber J, which is provided with a single side chamber (Ja) off its left (south) wall. The tomb is poorly cut, and water penetration has further contributed to the tomb's rough appearance. Only in the burial chamber are there traces of decoration.

At one time it was believed that KV 38 was the original tomb of Thutmes I, for which the official Ineni (owner of TT 81) claimed sole responsibility. This was based, in part, on the relatively small size and simple plan of the tomb, considered an early phase in the development of New Kingdom royal tomb architecture. According to this reconstruction, Hatshepsut had her father reburied in KV 20 in a stone sarcophagus originally made for her but reworked for Thutmes I. Subsequently, Thutmes III returned the body of Thutmes I to KV 38 where it was placed in a new sarcophagus.

At the end of the New Kingdom, the body was removed again to the cache in TT 320. Romer and others now feel that this tomb was constructed on the orders of Thutmes III for the reburial of his grandfather, following a previous reinterment by Hatshepsut in her expansion of KV 20, the original tomb of Thutmes I. The ascription of responsibility for KV 38 to Thutmes III depends on the similarity of plans of the burial chambers of KV 34 and KV 38 as well as KV 42, all with rounded corners and one or two central pillars. In all three tombs the sarcophagus is at the rear of the burial chamber.

In 1899, the tomb was cleared, and fragments of decoration, inscribed with the Imydwat, were removed. They are now in the Egyptian Museum, Cairo. In 1919, Carter recovered uninscribed foundation deposits from outside the entrance to the tomb.

The poor quality of the rock, and floodwater penetration explain the very rough condition of the tomb today. It stands open, littered with rubbish. 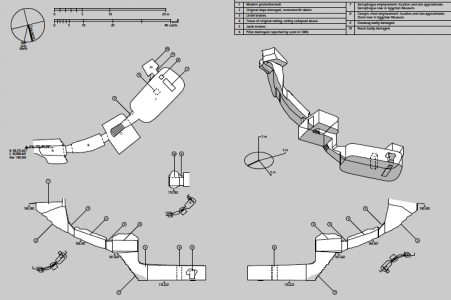 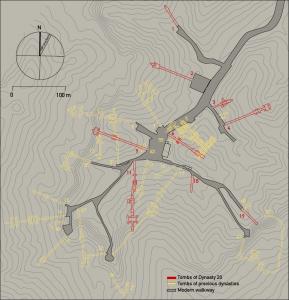 King of Upper and Lower Egypt, Great became the Soul of Ra; Son of Ra, Born of Thoth