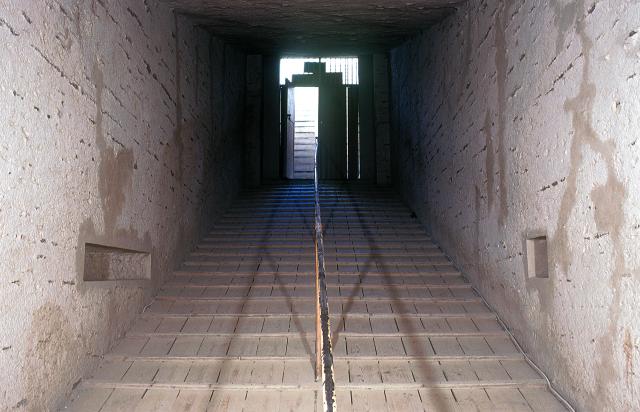 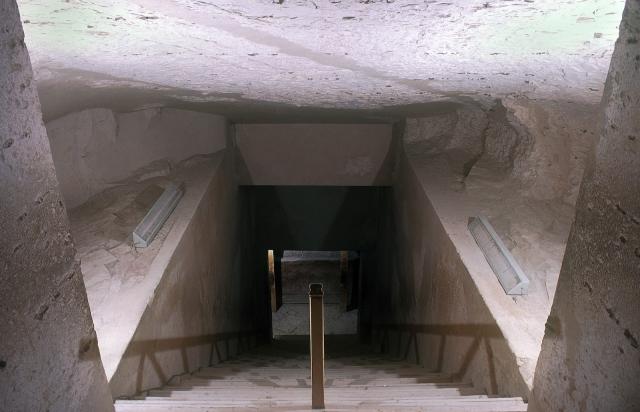 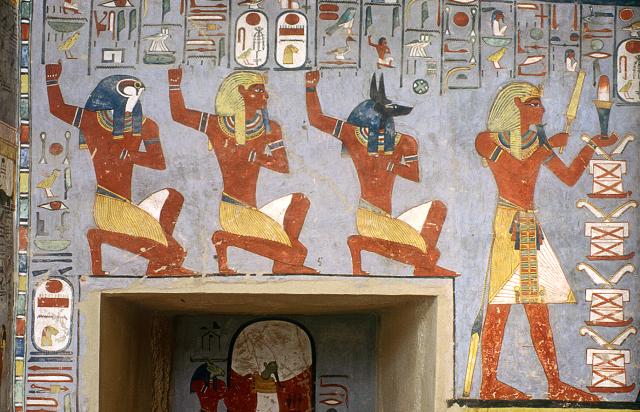 Modern steps lead down from the present wadi surface to the ancient steps. The ancient undecorated entrance stairs that follow are now covered by a modern wooden stairway. The entryway is surrounded by modern walls.

Following the overhang of the cliff face is the undecorated first gate of the tomb, which contains four steps. A pair of modern brick jambs have been set against the thicknesses of the original jambs to support the gate.

A pair of beam holes for lowering the sarcophagus with the aid of ropes were cut in the side walls two-thirds of the way down the sloping corridor B. The passage is well carved, but undecorated.

The gate was undecorated. The slope of the floor in corridor B continues through this gate and the slope of the soffit beneath the lintel is continued in the ceiling of corridor C. Both Burton and Lane reported traces of plastering and remains of blocking in this gate.

This stairwell was well carved, but undecorated. The unfinished trapezoidal recesses in the left (southeast) and right (northwest) walls are wider than usual for royal tombs of this period. There is an overhang above the lower part of the stairs.

There is a sloping soffit beneath the high lintel. The threshold slopes slightly downward from front (northeast) to back (southwest).

This rectangular chamber with a flat floor and ceiling has side chambers off the right (northwest), rear (southwest) and left (southeast) walls. Pairs of magical brick niches are placed high in the left and right walls, opposite the foot and head ends of the sarcophagus. The painted decoration on a thick coat of plaster shows the king accompanied by deities on the front (northeast) and rear walls and on the left wall, east of gate Ja. Excerpts from the Book of Gates are found on the right and left walls.

The walls of this side chamber, off burial chamber J, were smoothed, but not plastered or decorated.

The gate leads from burial chamber J to side chamber Ja.

This small side chamber at the rear (southwest) end of burial chamber J with an upward sloping floor and downward sloping ceiling, may represent an abandoned cutting originally intended to extend the burial chamber to the southwest. A scene from the third division (P)/fourth hour (H) from the Book of Gates decorates the rear wall. In it, the ram-headed form of Anubis embraces an enshrined Osiris before the serpent-goddess Nesert. The right (northwest) and left (southeast) walls are undecorated.

The gate leads from burial chamber J to side chamber Jc.

The walls of this side chamber were smoothed but never plastered or decorated. Belzoni found a wooden ka statue here.

KV 16, located in the southeast Wadi, was unfinished at the time of Rameses I's death. Its axis is oriented roughly to the southwest. The tomb is of a simple plan, and has a stepped entryway (A), a sloping corridor (B) and a stairwell (C), followed by the burial chamber J with three side chambers (Ja-c). A pair of holes in the walls of corridor B served to hold a beam for lowering the Sarcophagus with the aid of ropes. The unfinished trapezoidal recesses in corridor C are unusually wide.

Burial chamber J comes immediately after the second corridor B.

Only the entryway and the first two corridors of KV 16 had been cut when Rameses I died. The broken condition of the Sarcophagus lid and the upper edge of the box show that the tomb was plundered, perhaps at the end of Dynasty 20 or in Dynasty 21. The mummy was eventually cached in TT 320 in the tenth regnal year of Saamen after previously being hidden in KV 17. The tomb entrance subsequently was covered over, as the absence of any Greek or Latin graffiti attests.

The Supreme Council of Antiquities has installed four ceiling supports in the burial room around the Sarcophagus, the sarcophagus lid has been placed on the box with repairs in tinted plaster made to breaks in both box and lid. Wooden walkways, stairs and fluorescent lighting have been added.

The stone in the tomb is fractured and has suffered from flood damage. Rain water entered the tomb through joints and faults in the surface limestone. The painted decoration has also suffered from the floods: paint has flaked off and the walls have cracked because of rock movement. King of Upper and Lower Egypt, Eternal is the Strength of Ra; Son of Ra, Ra has Fashioned Him

44 Photos
+0
See All Close
Want to use these images?

Belzoni, Giovanni Battista.  Narrative of the Operations and Recent Discoveries within the Pyramids, Temples, Tombs, and Excavations, in Egypt and Nubia, and of a Journey to the Coast of the Red Sea, in Search of the Ancient Berenice, and Another to the Oasis of Jupiter Ammon.  Two vols.  London: Murray, 1821.  Pp. 229-230. 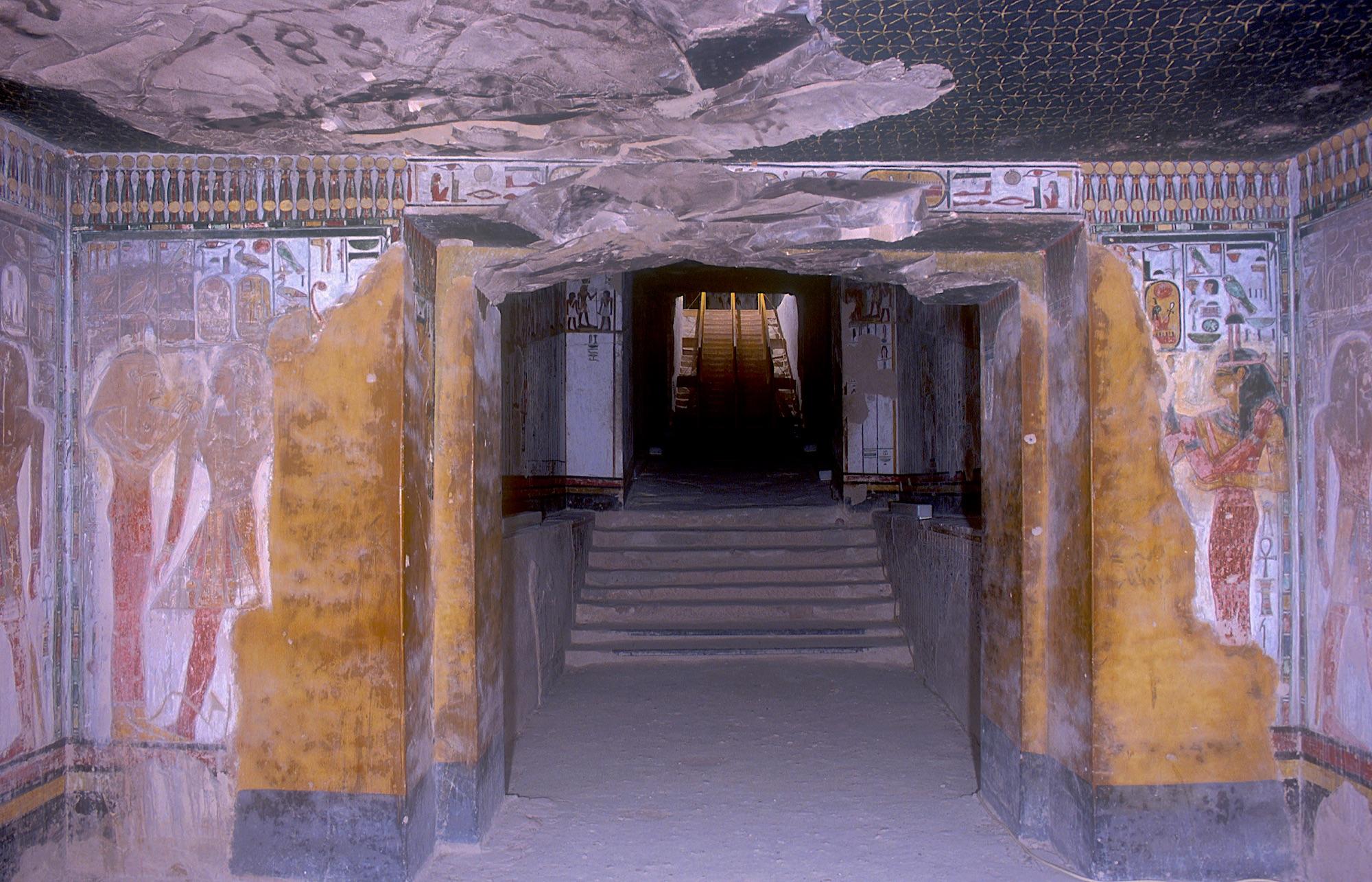