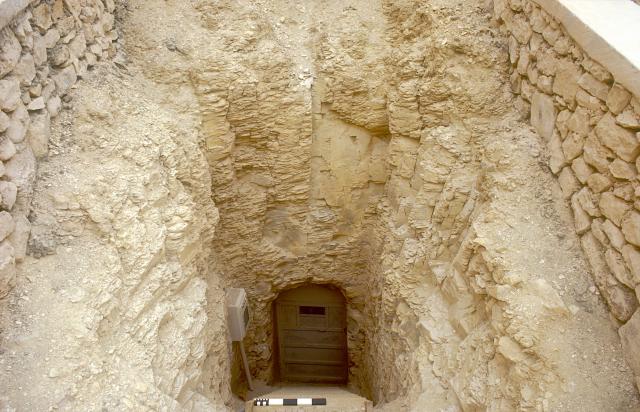 This roughly cut entryway is offset to the northwest of the tomb's main axis. It is similar in design to those of KV 5 and KV 38. The stairway is broken.

A set of steps is cut in the floor at the rear of chamber B, left (west) of gate C, between the central pillar and the rear (north) wall. The steps descend towards the northwest corner, and part of the rear wall has been cut back above the right (north) side of the stairway. The edges of the steps near the bottom are not parallel to the upper ones but are skewed to the southwest.

This roughly finished chamber contains a single central pillar and a stairway which descends westward below the rear (north) wall to an unfinished side chamber (Bb). A gate in the right (east) wall, near the northeast corner, opens to another unfinished side chamber (Bc), and a third unfinished chamber (Ba) opens off the front (south) wall, west of the entrance. A shallow sloping ramp is cut into the floor east of the pillar and leads to gate C in the rear wall.

The gate is cut in the front (south) wall of chamber B.

This side chamber is unfinished.

The gate is cut in the left (west) wall of chamber B and is accessible by a stepped descent.

This is an unfinished chamber. Only the lower right (south) part of the front (east) wall was fully cut.

The gate is cut in the right (east) wall of chamber B.

This unfinished side chamber lies to the right (east) of chamber B.

The gently sloping ramp in chamber B passes through this gate to form the floor of corridor C. The opening of this gate widens from south to north (front to back).

The slope of the floor is greater than that of the ceiling. The cutting is smoother and the height is greater at the rear (north) end than the front (south) end of the corridor.

The soffit and threshold of this simple gate are level.

This long, narrow, and low chamber has three side chambers (Fa, Fb, Fc) off the left (west) wall and one side chamber (Fd) off the right (east) wall. The gates to Fa and Fd are nearly opposite each other, and there are outlines in paint for two additional uncut gates on the east wall opposite gates Fb and Fc. Outlines for a third gate are visible on the rear (north) wall left of gate G.

The soffit and threshold of this gate slope down from south to north (front to back).

This is a simple gate with a short lintel, a flat soffit and a barely sloping threshold.

This long, narrow, and low chamber has three side chambers (Fa, Fb, Fc) off the left (west) wall and one side chamber (Fd) off the right (east) wall. The gates to Fa and Fd are nearly opposite each other, and there are outlines in paint for two additional uncut gates on the east wall opposite gates Fb and Fc. Outlines for a third gate are visible on the rear (north) wall left (west) of gate G.

The cutting of the rear (west) wall of side chamber Fa is unfinished, probably due to a vein of hard calcite. The longitudinal axis of this chamber is parallel to chamber F.

Side chamber Fb was unfinished due to a slanting vein of calcite in its rear (west) wall.

The cutting of side chamber Fc was unfinished due to a vein of hard calcite in its rear (west) wall.

The cutting of side chamber Fd was unfinished due to a vein of hard calcite in its rear (east) wall. The longitudinal axis of the chamber is parallel to that of chamber F.

The gate is cut in the right (east) wall of chamber F.

In 1997, a low wall was constructed across the threshold of gate G to prevent water from reaching the break into KV 9

A breakthrough took place at the bottom of the right (east) wall during the construction of KV 9.

The gate is cut in the left (west) wall of chamber G.

The cutting of the walls is irregular. The chamber is undecorated, but a graffito (no longer visible) was reported on the front (east) wall by James Burton.

The plan of KV 12, particularly of its lower chambers, suggests that it was intended for multiple burials of royal family members. It lies on a south-north axis and is unusual in several ways. The slightly offset entryway (A) opens into a chamber (B) with a single pillar, three unfinished side chambers (Ba-c), and a stairway, rather than into the long first corridor typical in other tombs in the Valley. This first chamber is followed by two corridors (C and E), separated by a chamber with descent (D).

The builders of KV 9 accidentally broke into this tomb when carrying out their excavations. Where we would expect the first corridor, the tomb builders cut a chamber (B) with central pillar, side chambers, and lateral descent. The unusual design of the tomb with its multiple side chambers is similar to KV 5 (but on a smaller scale), and also to KV 27 and KV 30.

Because KV 12 is not decorated, and because it has been thoroughly plundered, the exact dates of construction and use are unknown. It was probably begun in Dynasty 18 and used in Dynasty 19 or 20 for multiple burials, perhaps for royal family members, as KV 5 was used by Rameses II. The lower chambers pre-date Rameses VI since the east wall of chamber G was broken through by the tomb cutters of KV 9. If there had been any earlier burials, they may have been plundered at that time.

Wooden Steps and a wooden door were built at the entrance in 1994, and the lower steps were repaired with cement. Only a small amount of water entered the tomb during the 1994 flood. Because of the possibility of greater flooding in the future, however, a low wall was erected in gate G in 1997 to protect KV 9.

The walls and ceiling of the first chamber B, the first corridor C and stairwell D are covered with soot. The lower chambers are clean. 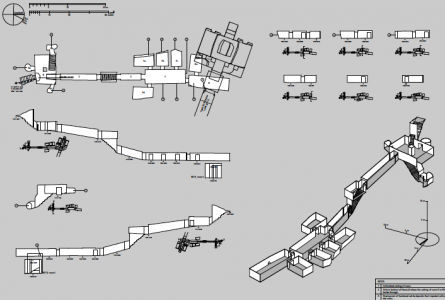 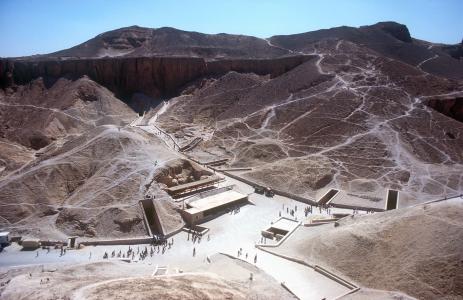 The Valley of the Kings was used for over five hundred years and as more and more tombs were dug there the site became increasingly crowded. 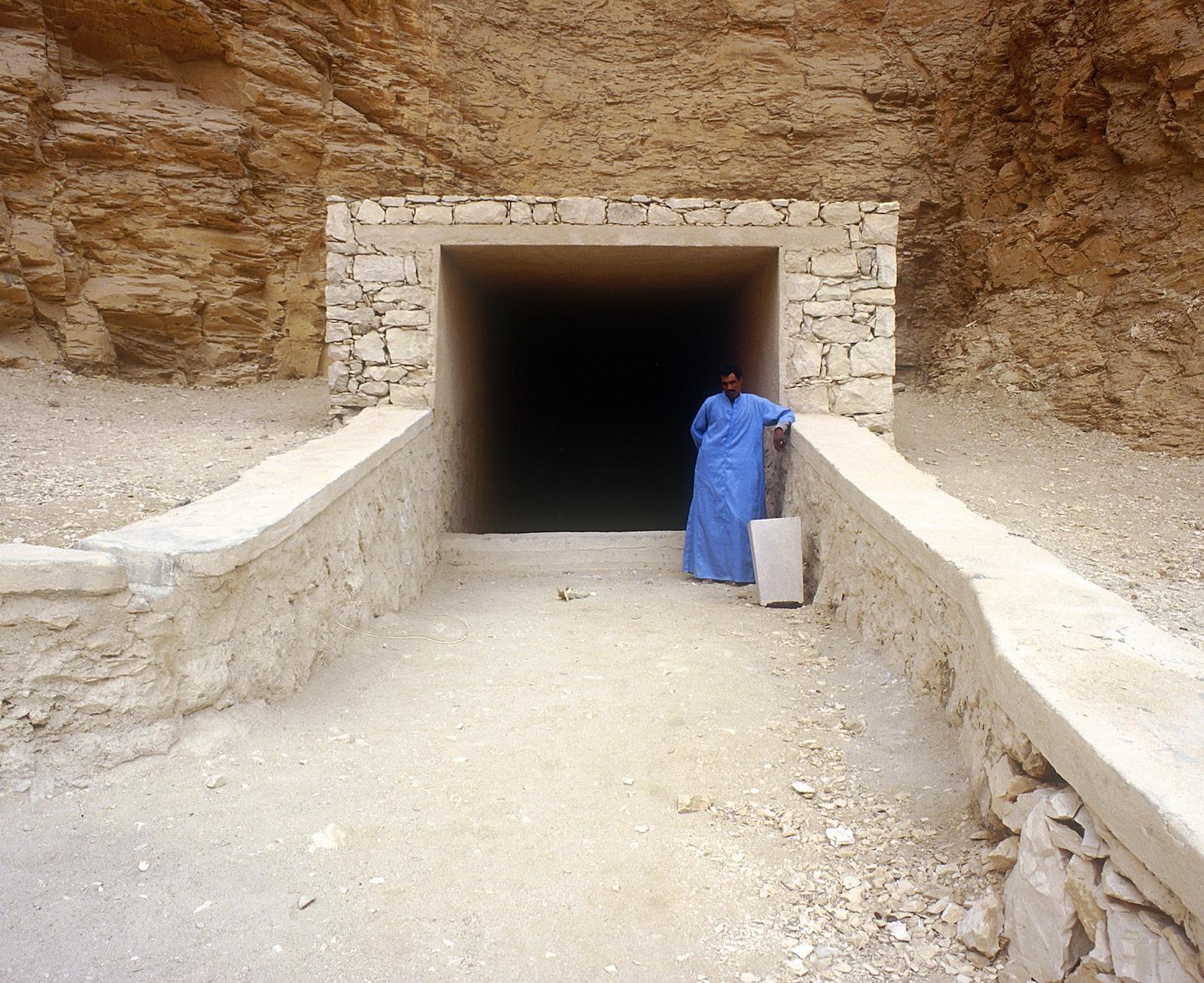