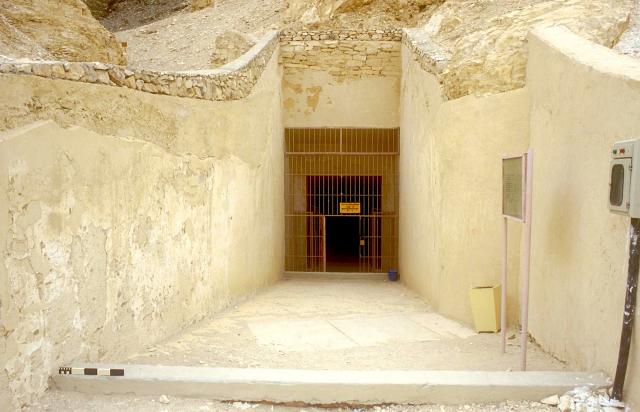 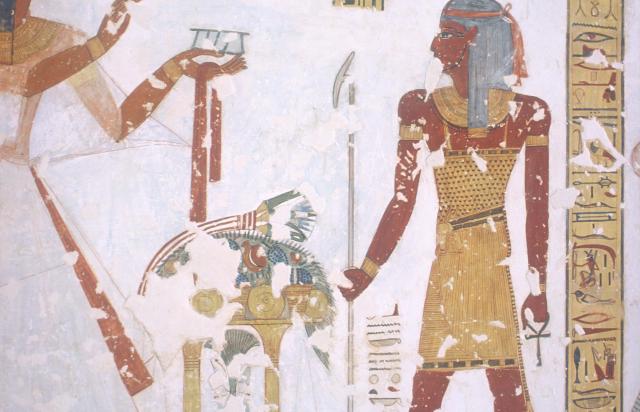 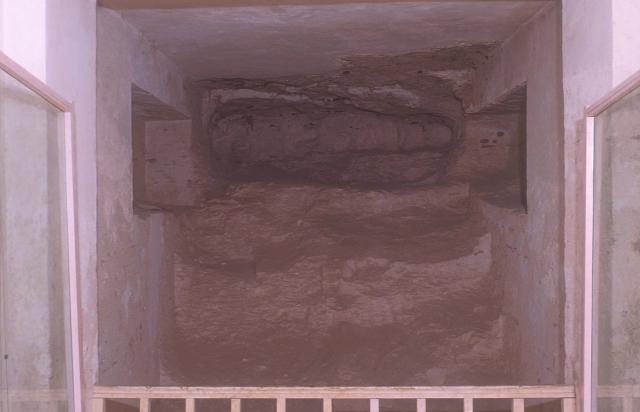 The entryway to this tomb is cut into the base of a short spur projecting from the cliff face between KV 20 and KV 43, near the head of a branch wadi well above the main valley floor. The sloping entry passes over the entrance steps of KV 60, a non-royal tomb of Dynasty 18. The plastered side walls of the approach are undecorated, and a deep overhang above the first gate shelters the southeast end of the entryway.

Door pivot holes and a ceiling recess in corridor B show that the gate was intended to be closed by a pair of wooden doors. An overhang protrudes from the lintel and partially shelters the gate. A step down to a flat landing is located at the inner edge of the gate. The reveals bear dedication texts in red, and several text columns in black occur on the thicknesses, above pairs of cobras representing Isis, Nephthys, Serqet and Neit.

A flat landing on the floor behind gate B leads to the sloping floor of this corridor. The plastered walls are each painted with seven scenes, showing Mentuherkhepeshef worshipping and making offerings to various deities: Osiris, Ptah Ta-Tjenen, Khonsu, Bastet, Imsety, Qebehsenuef, and Amen-Ra are shown on the left (northeast) wall; Ptah, Thoth, Banebdjed, Hapy, Duamutef, Meretseger and Sekhmet are depicted on the right (southwest) wall. At the beginning of the corridor, beneath the ceiling recess, a door leaf has been painted on both side walls. Hieratic texts on these painted doors give spells from the Book of the Dead.

Only one door pivot hole is visible in the ceiling behind the left (northeast) jamb. Since the cutting of the corridor beyond was abandoned, it is not likely that door leaves were installed.

The quarrying of the tomb was abandoned after the start of this second corridor, and workmen had only begun a four-tiered excavation of stone from the corridor beyond the two rectangular recesses flanking the interior of the gate. A rectangular pit, cut into the floor just inside the second gate, apparently was covered with stone slabs, and may have served for a burial, perhaps of Mentuherkhepeshef or a later intrusive one.

KV 19 is cut into the end of a short spur projecting from the cliffs between KV 20 and KV 43, at the head of a southeast branch of the southeast wadi. It lies on a northwest-southeast axis. Except for the royal tombs of Rameses VII, Rameses VIII, and Rameses IX, no tombs have entrances or corridors as wide as those in KV 19. Texts on the reveals of gate B state that the owner was a prince. Representations of the deceased in front of various deities and hieratic texts of the Book of the Dead are painted in corridor B, and enigmatic compositions occur on gate B. The quarrying of the tomb was abandoned after the start of the second corridor C. A rectangular pit just inside gate C may have served for a burial, perhaps that of Mentuherkhepeshef or a later, intrusive one.

This tomb may have originally been intended for Rameses VIII, but was abandoned. A pit was cut in the floor at the beginning of corridor C. The well-preserved painted plaster decoration depicts the prince alone before deities.

The Supreme Council of Antiquities has installed glass paneling, a wooden walkway and a metal gate.

The painted plaster decoration is in relatively good condition, although some damage has occurred to the scenes closest to the entrance. During the 1994 floods, water entered the tomb but did not reach the level of the painted decoration. 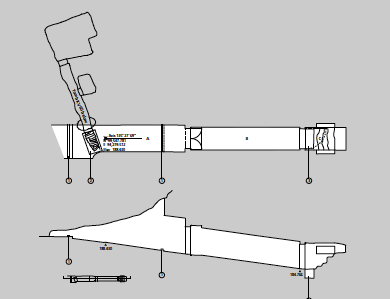 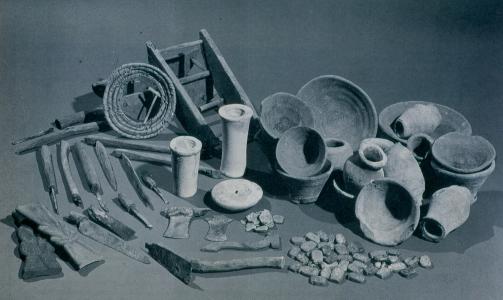 Belzoni, Giovanni Battista.  Narrative of the Operations and Recent Discoveries within the Pyramids, Temples, Tombs, and Excavations, in Egypt and Nubia.  London: Murray, 1820.  P. 227.

Montu is over his Strong Arm