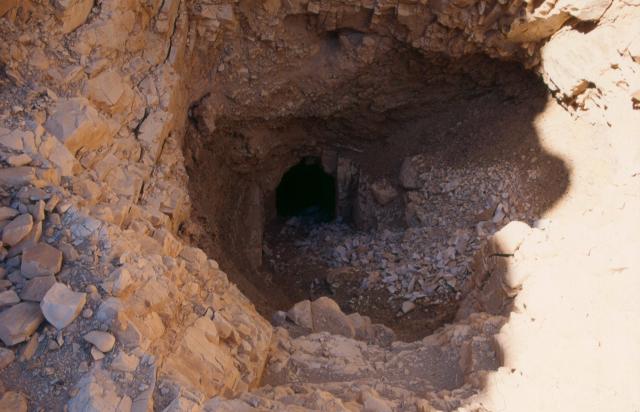 The entrance stairwell is cut into the base of a cliff on the southeast side of a water course leading to the tomb of Thutmes III. Roughly cut stairs descend through a gravel and shale stratum to the entrance gate. The stairs cut into the shale are broken away and the others are damaged.

The lintel of the gate is missing, and the roughly cut jambs are damaged.

This rough-cut sloping corridor has an extension to the left (south) that is cut at its rear (west) end to form chamber B1a. According to Rose, a rough recess in the right (north) wall may be either from rock fall or an abandoned cutting. There are traces of red paint on the ceiling.

This southward extension at the end of corridor B1 was apparently added secondarily. It gives access to two sets of descending passages to burial chambers on different axes, with a descent in its floor to the rear (south) and a corridor descending to the east from the left (east) wall.

Steps descend from the center of the floor to the rear (south).

This long corridor is oriented on a west-east axis and descends from the left (east) wall of chamber B1a.

This stepped descent is cut into the left (south) end of the floor of chamber C1, on the axis of corridor B1.

The gate is a low, rough opening and has a rubble-built pillar near the right (north) thickness, perhaps for additional support. Rose describes this pillar, but it is shown only schematically in the published plan. There is damage to the jambs and lintel.

This rectangular chamber extends to the right (north) of its entrance. There is a stepped descent in the floor at the left (south) end of the chamber.

This stairwell, oriented towards the east, immediately follows corridor B2, without any gate between the two components.

This is the second stairwell in the eastern set of components. There is no intervening gate between these stairs and corridor D1 which precedes it.

This stairwell, the third major component on the southern axis, has broken steps that first led the excavators to believe that a chamber lay beneath the stairs. This is not the case.

This is the second sloping corridor in the eastern set of components.

The gate is well-cut and leads into burial chamber chamberJ1.

This almost-square chamber marks the end of the tomb's eastward passages. It has a low, flat ceiling. There is a large fissure running through it.

At the end of the south corridors is a very narrow, rectangular chamber. In the floor of this chamber is a pit which would have served as a sarcophagus emplacement.

KV 39 is located at the head of a water course on the plateau above and to the south of KV 34. The entryway stairway (A) is cut in the side of the hill below al Qurn followed by a sloping corridor (B1) that has been enlarged to the south at its lower end (B1a). Beyond this corridor, a rectangular chamber (C1) extends to the north of the axis. There is a stepped descent cut on the axis in the floor at the south end of this chamber. Two other descending corridors open off the south extension B1a. One descends southwards from a stairwell in the floor and continues as a rough cut sloping corridor (B3) to another stairwell (C4) leading to a rectangular burial chamber (J2) extending to the east with a pit in the floor beneath the rear wall. The other set of passages extends on a west-east axis parallel to the entrance.

A sloping corridor (B2) descends to a stairwell (C2) followed by a second corridor ( D1) and stairwell (C3), a short corridor (D2) and a low rectangular burial chamber (J1). Weigall's description of the tomb suggests that some decoration remained intact at the time of his entry. All traces of decoration were obliterated by the time Rose cleared the tomb. Weigall based his belief that the tomb belonged to Amenhetep I on perceived similarities of position between KV 39 and that described for Amenhetep I's tomb in the tomb robbery papyri.

The tomb descends in three different directions on three axes. Each axis consists of a series of corridors and two at least end in rectangular chambers.

There appear to have been three construction phases, suggested by differences in architectural typology and the orientation of component groups. Entryway A, corridor B1, and chamber C1 and its descent would have been cut first, and suggest a date in the first half of Dynasty 18. Following a southward extension at the end of the corridor B1, two other complexes of corridors and stairs leading to burial chambers were cut to the south and to the east, although it is not certain in which order these were done.

The upper components of the tomb are cut in poor quality shale and preserve less of their original surfaces. The lower corridors and chambers are cut in better limestone, although several large cracks or fissures have led to structural damage as rock has fallen away. The lower chambers to the east were partly filled with debris by the 1994 floods, although they are still accessible. The southern corridors and chamber were completely filled up to descent B1a. 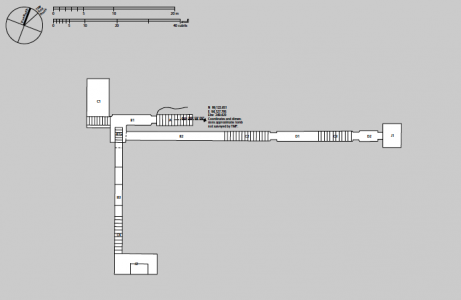 Polz, Daniel K.    The Location of the Tomb of Amenhotep I: A Reconsideration.  In:  Richard H. Wilkinson (ed.), Valley of the Sun Kings: New Explorations in the Tombs of the Pharaohs.  Tucson: University of Arizona Egyptian Expedition, 1995.  Pp. 8-21.

King of Upper and Lower Egypt, Sacred is the Soul of Ra; Son of Ra, Amen is Satisfied