The entryway to the tomb is a shaft.

The gate is located in the rear (north) wall at the bottom of the shaft and leads into chamber B.

KV 58, located in the main Wadi, consists of an entryway shaft (A) and a small, undecorated chamber (B) cut into the steep base of a hill near the floor of the branch wadi running up to KV 35. Most of the finds lay two meters down the shaft and in the chamber. Among these were a large amount of gold foil, knobs, and an uninscribed calcite Shabti.

The tomb contained gold foil, which probably belonged to a chariot harness, bearing the names of Tutankhamen and Ay.

This tomb is of an uncertain date although some have thought it was associated as a dependency of KV 57. It appears to have been used as a secondary cache for burial equipment belonging to Ay, which perhaps was originally placed in KV 23. Some have theorized that this material was placed here in association with a possible reburial of Ay in nearby KV 57. Another theory is that it represents an abandoned robber's hoard of material taken from KV 23.

Entryway A is filled with rubble, blocking access to chamber B. 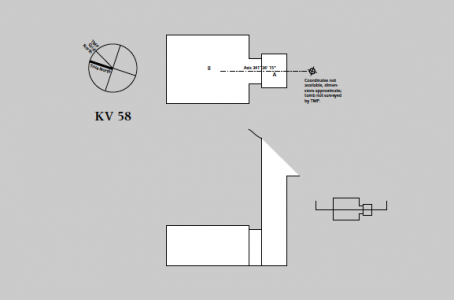