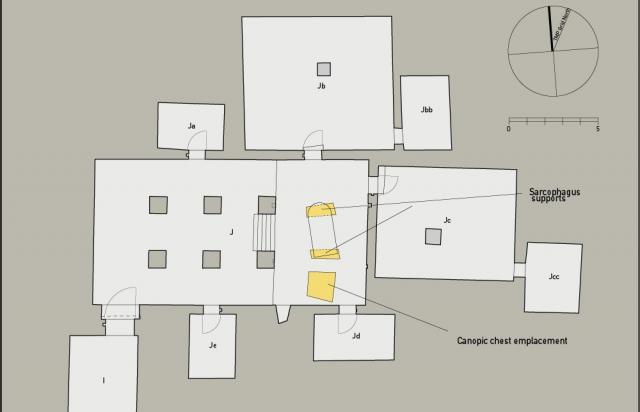 The entrance is cut in the side of the hill below a cliff face in an embankment on the east side half way into the West Valley. Seven foundation deposits were found in front of the undecorated entrance. A flight of steps leads down to the first gate of the tomb, beneath an overhang. The upper part of the stairway is badly broken.

The soffit and threshold of this undecorated gate slope down from front to back. A modern gate with cement jambs and two steps has been added.

This is a sloping, undecorated corridor.

The cutting of the gate was finished but it was not decorated. The soffit and threshold slope down from front to back.

Two trapezoidal recesses were cut at the top of the stairwell. The cutting of the recess on the left (north) is less finished than that on the right (south). The sixteen steps of the stairway end in a flat landing in front of gate D. There is some damage to the left face of the stairwell.

The soffit and threshold of this undecorated gate slope down from front to back.

This undecorated corridor slopes down to well chamber E.

The soffit of this undecorated gate are level, while the threshold slopes down slightly.

A deep shaft occupies the floor of this rectangular chamber and a gate in its front (west) wall leads to side chamber Ea. The walls and ceiling were almost completely decorated and painted. There are four scenes on the left (north) wall. The first shows the king, accompanied by his father's ka, embraced by Hathor. The remainder show the king receiving life from Anubis, the Western Goddess, and Osiris. The right (south) wall has four scenes, the first of which has the king with his father's ka before Nut. The rest of the scenes are the same as the ones on the left wall. The rear (east) wall originally had six scenes, but two were on the plastered blocking of the door, which is now gone. What remains shows the king receiving life from Hathor on either side of the door, and from Anubis and the Western Goddess to the south. Every representation of the king has a vulture, representing the goddess Nekhbet, hovering over the king's head. Across the top of the three walls runs a kheker frieze and a yellow and red painted border along the bottom. The chamber has a ceiling of yellow stars on a blue-painted background. In several instances, the face of the king has been cut out.

The chamber lies at the bottom of the shaft in well chamber E. Two steps descend from the gate. The floor of this west-oriented chamber is 0.8 m (31.5 inches) lower than the bottom of the well shaft. The left (north) wall is scarred by chisel marks, the right (south) wall is unfinished.

This gate, located in the right half of the west wall at the bottom of the shaft, opens into side chamber Ea.

The stepped descent begins near pillar 1 at the right end of the front wall of chamber F and ends at gate G.

The soffit and threshold of this gate slope downward from front to back.

The corridor slopes directly into stairwell H. There is no intervening gateway.

This short stairwell has of a flight of steep steps. The ceiling slope approximates that of corridor G, not that of the stairway. An unusual feature is the lack of a gate between G and H. An originally flat landing at the bottom of the stairway in front of gate I has had steps cut into it.

The gate into chamber I has a level threshold, but the soffit was cut sloping down from front to back. There is a hieratic graffito on the right (east) of the gate.

The walls and ceiling of this chamber preceding the burial chamber were decorated and painted, with the exception of the front walls. On the left (west) wall, the king receives life from Hathor, Nut, the Western Goddess, Anubis, Hathor and Osiris. Corresponding scenes, on the right (east) wall, include the king before the same arrangement of deities. These scenes have been damaged. On the rear (north) wall, four scenes are divided in two groups: the king before the Western Goddess and Anubis are shown on the left; the king and his ka before Nut and Hathor are shown on the right. Much of the right hand groups of figures has been lost, together with the blocking of the door on which they were painted.

The gate is cut right of center of the rear (north) wall of chamber I and opens into the southwest corner of the upper level of burial chamber J. The gate has compound jambs and there are two wide steps down from the floor level of chamber I to that of the upper level of burial chamber J. A rectangular notch in the left (west) outer thickness contains part of a thin wood slab, centrally pierced and held with plaster. It served as a door bolt hole. A horizontal slot along the inner edge of the outer soffit is an emplacement for the lintel beam that held the a door pivot. The gate was originally sealed.

The floor at the right (east) end of the burial chamber is sunken and reached by a narrow flight of five steps between the easternmost pair of pillars. The red granite sarcophagus lay in this sunken section, where two parallel rectangular slots in the center of the floor marked the position for blocks to support the missing box. Only the fragments of the broken lid now remain. At the front (south) end of this area, a deeper pit may be an emplacement for the canopic chest. Pairs of magical brick niches were cut in the right wall and in the left wall of the lower level beneath the pillars. The upper level has two rows of three pillars on an east-west axis.

The walls were plastered and decorated showing the complete Imydwat. The text and figures were rendered in a cursive style more appropriate to papyrus versions, also seen in KV 34 and KV 35. This version of the composition, together with the abbreviated version, begins on the left end of the front wall and proceeds clockwise around the chamber to finish on the right wall. Much of the plaster has fallen away from the lower parts of the walls. The pillars are decorated with the king before such deities as Hathor, Osiris, the Western Goddess, and Anubis. The original layout grids, applied to assist the artists, are still visible on the faces of the pillars. Some of the pillars are badly cracked and have lost their painted plaster. In some instances, modern vandals have cut out the faces of figures. The ceiling plaster, much of which has fallen away, was decorated with yellow stars on a blue background.

This undecorated rectangular chamber extends north and is reached by a gate through the rear (north) wall of burial chamber J.

Gate Jb leads into side chamber Jb. There is a recess in the left (west) thickness. The level of the threshold is raised above the floor levels of the lower level of burial chamber J and of side chamber Jb. A stone block has recently been set inside gate Jb as a step down.

Traces of cutting marks on the front (south) wall and ceiling show that this chamber was enlarged from a smaller single side chamber. A single pillar stands in the center of the chamber. The gate in the east wall leads to side chamber Jbb.

The threshold is raised above the floor level of side chamber Jb.

This large, rectangular chamber extends east from the burial chamber. The floor of the chamber is 0.65 m lower than that of the burial chamber. A side chamber Jcc is reached through a gate in the southeast corner and a single pillar stands in the middle. The walls and pillar of this chamber were plastered, and a border of kheker friezes was begun over the entrance and north side.

The level of the floor is lower than that of side chamber Jc.

This rectangular chamber extends south and is reached by a gate from the southeast corner of the burial chamber. A horizontal slot cut in the front (north) wall above the gate may be an emplacement for a beam to hold a door pivot.

This rectangular chamber, extends to the south and is reached by a gate from the center of the front wall of burial chamber J.

KV 22 lies midway into the West Valley on an embayment on the east side. In plan, it is very similar to the tomb of Thutmes IV (KV 43). It consists of two corridors (B, D), separated by a stairwell (C), leading to well chamber E with shaft and side chamber Ea, a pillared chamber (F) with side descent, a corridor (G), a stairwell (H), another chamber (I), and the burial chamber J. The burial chamber has several side chambers leading off it (Ja-Je). Side chambers Jb and Jc each have a side chamber (Jbb and Jcc).

The tomb is decorated with the Imydwat (burial chamber J) and representations of the deceased with deities (well chamber E, chamber I, burial chamber J). KV A, a commencement or pit close to KV 22, may have served as the tomb’s store room.

This tomb is the largest in the West Valley of the Kings. Two subsidiary burial suites, with pillar and side chamber, are located off burial chamber J. There is a pit for canopic equipment. The king represented with the royal ka is rather unique.

The tomb was apparently initiated by Thutmes IV, as his name appears on material in the foundation deposits. It was completed and decorated by Amenhetep III. It is possible that Tiyi and Sitamen were also to be buried here. The sarcophagus box was removed at some unknown time in antiquity, perhaps for reuse, although no trace of it has been found. The mummy of the king was moved to the cache in KV 35 during the reign of Smendes. There is evidence of intrusive burials, probably of the Third Intermediate Period, including fragments of a wooden coffin in the well.

The tomb was superficially cleared by Theodore Davis in 1905-1914. Howard Carter excavated more thoroughly in 1915. Over three seasons in 1989 and 1990, the tomb was re-cleared by Sakuji Yoshimura and Jiro Kondo of Japan's Waseda University. Now, they are focussing on conserving and cleaning paintings on the walls and ceiling of the tomb.

During the nineteenth century, unknown visitors to the site removed several paintings of faces from the walls and pillars, some of which are now in the Louvre. The paintings have been damaged by salt efflorescence. Cracks in the pillars have expanded. Kondo, Jiro.  A Preliminary Report on the Re-clearance of the Tomb of Amenophis III (WV 22).  In: Carl Nicholas Reeves (ed.), After Tutankhamun: Research and Excavation in the Royal Necropolis at Thebes (= Studies in Egyptology).  London: KPI, 1992.  Pp. 41-54.

King of Upper and Lower Egypt, Lord of Justice is Ra; Son of Ra, Amen is Satisfied, Ruler of Thebes