A
Entryway A
B
Corridor B
See Entire Tomb

The entrance is cut through a deep layer of hard-packed gravel. At least seven steps were made of rocks and mud and then installed over the bedrock. The next seventeen steps were cut from the bedrock. Schaden had a retaining wall built on the right (northwest) side of the upper section of the stairway.

The soffit and threshold of this gate slope down from front to back. The gate was sealed at the time of discovery.

The drop in the ceiling height at the end of the chamber indicates unfinished cutting, and is not the lintel of a gate.

The tomb is located at the southwest end of the West Valley, about ninety meters below KV 23. It was cut into the sloping hillside. It consists of the entryway A and a single corridor (B). Although unfinished, KV 25 has the plan of a royal tomb. The walls are well cut and cracks were covered with a thin layer of plaster. When discovered, a stone wall blocked the entrance to corridor B which held intrusive burials of the Third Intermediate Period. Two groups of four coffins each contained mummies. The tomb was left undecorated.

The original owner of KV 25 is uncertain. According to Schaden, KV 25 was built as a royal burial during late Dynasty 18 (possibly Amenhetep IV), but was never completed. During the Third Intermediate Period (Dynasties 21 and 22), the tomb was reused to bury eight mummies. If no previous interment took place, the objects of Dynasty 18 were probably introduced at this period. This material presumably originates from KV 23. After the reburial, the tomb remained undisturbed until its discovery by Belzoni.

The tomb was excavated in 1972 and 1973 by the University of Minnesota Egyptian Expedition, directed by Otto Schaden. 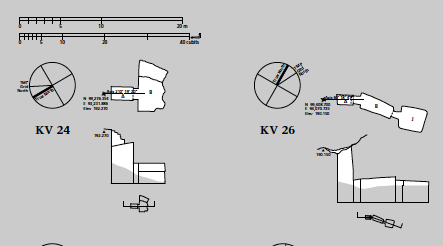 Belzoni, Giovanni Battista.  Narrative of the Operations and Recent Discoveries within the Pyramids, Temples, Tombs, and Excavations, in Egypt and Nubia.  London: Murray, 1820.  Pp. 223-224.