A
Entryway A
B
Corridor B
C
Stairwell C
D 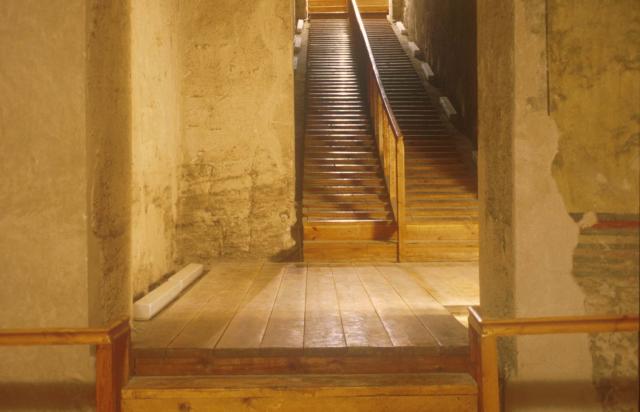 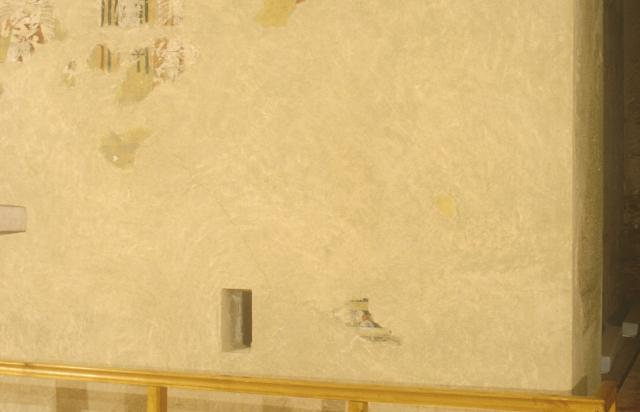 KV 23 is entered by a rock-cut stairway descending into the talus slope fronting the cliffs on the north side of the wadi. There is a roughly cut overhang next to gate B.

Gate B contains a compound jamb.

This sloping corridor has a pair of beam holes near the end. These were to control the descent of the sarcophagus into the tomb.

The sloped floor of corridor B continues through the gate.

Beyond the second gate, a stairwell, flanked at the top by trapezoidal recesses, passes beneath a projecting overhang at its lower end. The steps are badly damaged.

The ceiling and floor of this corridor have a moderate sloping descent. The upper part of the front section of the corridor is uncut.

The undecorated gate leads into chamber E. Its threshold is sloped, while its soffit is level. Traces of rocks and plaster show that the gate was sealed in antiquity.

Chamber E is the usual location of the well shaft, but here it was not cut through the level floor. There are traces of plaster blocking at the entrance.

The long axis of the burial chamber that extends to the northeast is perpendicular to the axis of the preceding chambers. This turn of the axis, in what would have been intended as the pillared chamber (with the pillars removed), suggests that KV 23, if completed, would have followed the usual Dynasty 18 royal tomb plan, with a descent in the floor at the far end of the chamber. A rectangular niche for a magical brick is cut into the center of each wall of burial chamber J, approximately a meter (three feet) above the floor. Four square depressions in the center of the floor served as emplacements for limestone blocks under the corners of the rectangular sarcophagus. This sarcophagus was returned to the chamber from the Egyptian Museum in 1993, although its present orientation is reversed from the original one.
The decoration in burial chamber J, the only decorated chamber in the tomb, is stylistically and thematically similar to that in KV 62. It also contains scenes unique for a royal tomb, showing the king and his wife engaged in activities in a marsh that had apotropaic symbolism.

11 Photos
+0
See All Close
More images in this section

The gate into the burial chamber is not centered in the rear (northwest) wall of chamber E, but offset to the right.

This low gate lies on the axis of the tomb and leads from chamber J to side chamber Ja.

Chamber Ja was probably carved secondarily to the original intended plan of the tomb to store the canopic equipment and additional tomb furnishings.

The tomb of Ay is located part way up the west branch of the main wadi of the West Valley, beyond KV 24 and KV 25. The tomb consists of an entryway (A), two corridors (B and D) separated by a stairwell (C), a chamber (E), a burial chamber (J), and a single side chamber (Ja). The burial chamber, the only decorated chamber in the tomb, is decorated with scenes from the Imydwat, Book of the Dead, and representations of the king and various deities. The decoration is similar in style and content to that of Ay's predecessor, Tutankhamen.

KV 23 was the last tomb to be used in the West Valley. In burial chamber J, the deceased is shown in a marsh, the only occurrence of this scene in a royal tomb.

It is generally believed that KV 23 was not originally intended for Ay. Proposed candidates for ownership have included Amenhetep IV, Semenkhkara, and Tutankhamen. It has also been suggested that Tutankhamen was first interred here before being moved to KV 62. Unfortunately, no foundation deposits have been found to support any of these proposals. Although it is not certain if Ay was buried here, remains of some of his funerary equipment have been found in the tomb. At an undetermined date, the images and names of Ay were hacked out from the wall paintings. It may have been at this time, or perhaps earlier, that the southeast side of the sarcophagus was smashed and the lid overturned on the floor. It should be noted that none of the cartouches on the fragments from this side or from the lid show evidence of erasure.

The Supreme Council of Antiquities has restored and re-installed the sarcophagus previously displayed in the Egyptian Museum (in reverse of its original position). It has placed the lid on the sarcophagus box, installed fluorescent lighting in burial chamber J, and installed wooden stairs and walkways in the corridors, as well as railings and a wood floor in the burial chamber. Breaks in the painted plaster have been patched and the surfaces of the undecorated upper corridors whitewashed.

Throughout burial chamber J, parts of the decoration have been lost. In some instances, this is the result of deliberate damage to the figures and names of the king, but there are also areas (e.g., to the right of the entrance) where stone has simply fallen away. 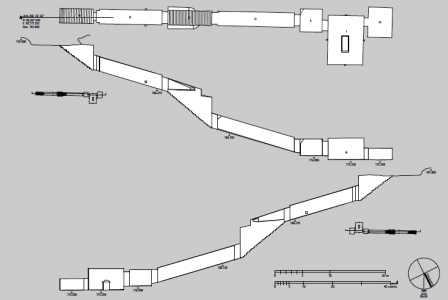 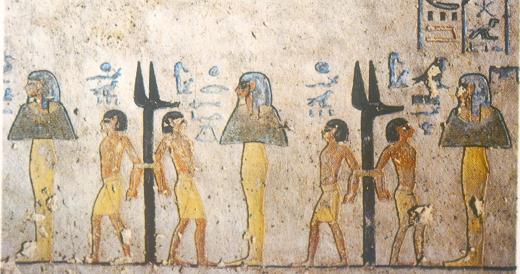 Belzoni, Giovanni Battista.  Narrative of the Operations and Recent Discoveries within the Pyramids, Temples, Tombs, and Excavations, in Egypt and Nubia.  London: Murray, 1820.  Pp. 123-124.

King of Upper and Lower Egypt, The Manifestations of Ra Have Come into Being, The One Who Does Right; Son of Ra, The God's Father Ay, The God Who Rules in Thebes