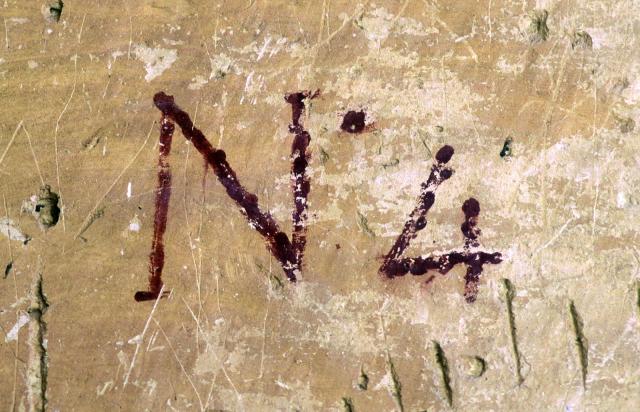 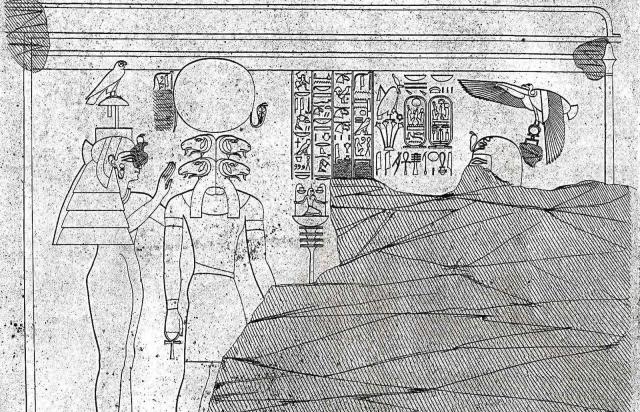 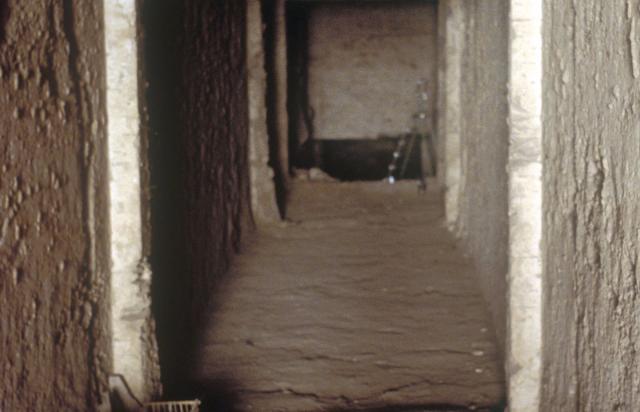 On the outer lintel is an unfinished scene with two figures of the king kneeling between Isis and Nephthys flanking the sun disk. The right (south) jamb has the king's names on it. Door pivot holes are present and there is a ceiling recess, indicating provision for a pair of door leaves to close the gate.

On the left (north) and right (south) side walls of this sloping corridor preliminary sketches in red show Rameses XI with deities. Depicted on the right wall is a kiosk containing the king before Amen-Ra-Horakhty with four ram heads, and the Western Goddess. On the left wall by the entrance, the king stands before Ra-Horakhty, the standard Rameside era preface to the Litany of Ra. Part of this scene was lost when the plaster on which it was painted fell away. It was replaced by a newer version under Pinedjem I, the high priest of Amen, who substituted his own names for the king's. The corridor is in fairly good structural condition, except for two large vertical cracks in the side walls.

This undecorated gate has a pair of notches at the top of the thicknesses, perhaps for a beam to support the lintel. Door pivot holes indicate the intention to close the gate with a pair of door leaves. There is a step down from the threshold to the floor of corridor C.

Rectangular horizontal recesses are cut high in the walls at the beginning of this undecorated, sloping corridor. Some damage to the walls has occurred below the rear of these recesses.

The door pivot holes in this undecorated gate indicate the intention to install a pair of door leaves. There is a step down from the threshold to the floor of corridor D.

The corridor is level and undecorated.

The lower part of the left (north) thickness of this gate is broken.

This roughly cut square, undecorated chamber had no well shaft carved in its floor, although one would expect there to be one in this chamber.

The door pivot holes in the ceiling at the inner edge of the lintel indicate the intention to install a pair of door leaves.

This chamber is narrower than in earlier tombs. The cutting was not finished. The four pillars are only partly carved. A steep central descent begins at the entry of the chamber and ends at gate G.

The slope of the ramp is uneven: it decreases beyond the second pair of pillars, then increases again after passing beneath the rear (east) wall to gate G. There is damage to the right (north) side of the descent between the pillars.

This undecorated gate has door pivot holes, indicating provision for a pair of door leaves. There is a slot in the top of the left (north) thickness, perhaps for a lintel beam.

This short corridor was left unfinished and undecorated. The walls on the left (north) and right (south) sides have been damaged along the vertical edges of a fault that runs diagonally across the corridor.

Four rectangular pillars occupy this burial chamber. The ceiling between them is vaulted and a deep shaft descends from the center of the floor. The chamber was undecorated, and the rear of the chamber and the rear pair of pillars were not completely cut. The front pair of pillars are damaged, and parts of the vaulted ceiling have collapsed. Burial chamber J may represent the enlargement of an original corridor G into a burial chamber when it was decided not to extend the tomb further with a corridor H, perhaps indicated by cutting on the midline of chamber J.

The tomb of Rameses XI, located in the southeast branch off the main Wadi, was abandoned without being used for the king's burial. The cutting of pillared chamber F and burial chamber J was left incomplete, and decoration was started only in corridor B, where a thick coat of yellowish plaster received preliminary sketches in red ink of Rameses XI with deities. Three gently sloping corridors (B, C, D) lead to the well chamber E and pillared chamber F. From the ramped descent F, a short corridor (G) leads to burial chamber J. A deep shaft descends from the unfinished burial chamber J and its pillars are rectangular instead of square, with the ceiling between them vaulted.

This is the last royal tomb cut in the Valley of the Kings. There is a deep shaft in burial chamber J.

Rameses XI was the last pharaoh to have a tomb built in the Valley of the Kings. KV 4 was never used for the king's burial. Romer believes that during Dynasty 21 the tomb was used by Pinedjem I as a workshop when he refurbished the funerary material from KV 20 (Hatshepsut), KV 34 (Thutmes III), and KV 38 (Thutmes I). Pinedjem I added his Cartouche to the wall decoration, but he did not use the tomb for his burial. KV 4 has been open since antiquity, and its popularity as an early tourist site is indicated by the number of Demotic, Greek, Latin, Coptic, French and English graffiti on the walls. The tomb was used as a residence during the Coptic period.

There is no evidence of flood damage in KV 4. An apparent ancient repair was made to the lower edge of the Overhang at the end of entryway A, consisting of a pair of Beam holes for a supporting baulk. A large vertical crack runs through the center of the overhang and displacement slippage has subsequently occurred. Large cracks in the walls of the upper corridors have resulted in the loss of plaster and the wall surface, particularly in the first two corridors B and C. 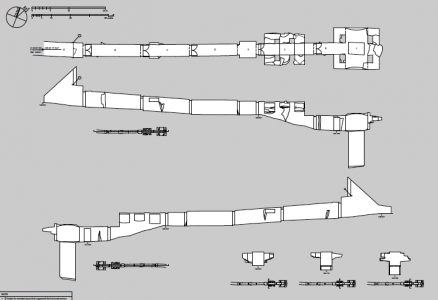 15 Photos
+0
See All Close
Want to use these images?

Ciccarello, Mark. The Graffito of Pinutem I in the Tomb of Rameses XI. In: Mark Ciccarello and John Romer, Theban Royal Tomb Project.  Unpublished ms.  Brooklyn: The Brooklyn Museum, 1979.

Ciccarello, Mark and John Romer.  Theban Royal Tomb Project: A Preliminary Report of the Recent Work in the Tombs of Ramesses X and XI in the Valley of the Kings.  Brooklyn: The Brooklyn Museum, 1979. 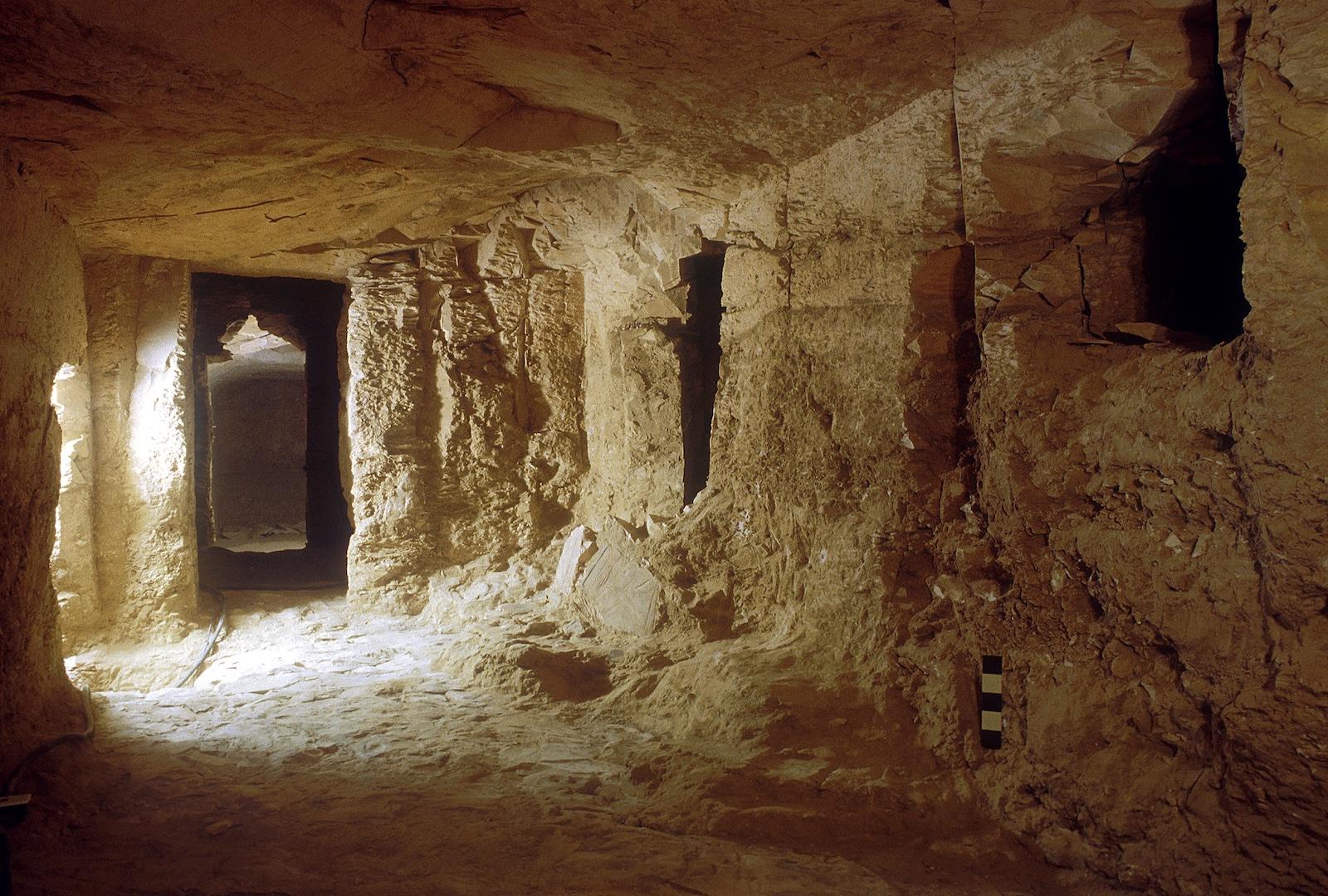