A
Chamber A
See Entire Tomb

The tomb is located in the main Valley of the Kings, some nine meters east of the entryway to KV 10, the tomb of Amenmesses, and some twenty-eight meters to the south of Tutankhamen’s tomb (KV 62). It consists of a shaft cut straight down into the bedrock, which opens into a ‘L’ shaped chamber, with the top of the ‘L’ at the north, and the extension of the ‘L’ to the west. All of the walls were well-finished, save for the western end of the ‘L’, which was unfinished, indicating that the prospective owner had died before the tomb was completed, or that its excavation had been abandoned for some other reason.

The eastern side of the room contained seven wooden coffins (an eighth Coffin, which was small, was inside one of the larger ones), and twenty-eight large storage jars to the west of the coffins. Once the material was removed to KV 10 for analysis, the coffins and storage jars were found to contain the remains of embalming materials. The analysis of the coffins, jars, and their contents is ongoing. Currently it is posited, based on the ceramics, coffins, and surviving fragments of sealings, that the remains are associated with a burial dating to the end of the Eighteenth Dynasty.

The work at KV 63 was led by Dr. Otto Schaden and after his death by Dr. Salima Ikram.

The Amenmesses Project, under the direction of Otto Schaden, was excavating the slope to the east of KV10, where the team had uncovered a series of workmen’s huts of the Ramesside period. At the bottom of the slope the outline of the shaft of KV63 was discovered in 2005 at the end of that year’s excavation season. The following year, 2006, the clearance of the shaft was carried out. The shaft led to a doorway to the south that was sealed with irregularly shaped pieces of limestone. There was some evidence that the chamber had been entered at least once, if not more than once, in antiquity, before being re-sealed.

Once opened, it was clear that the tomb consisted of one chamber that had not been completed as part of the western side was unfinished. The tomb contained several wooden coffins and sealed pottery jars. The coffins were in a poor state of conservation as they had been devoured by termites that had also left tell-tale tracks along the walls of the shaft and in portions of the tomb. The tomb was cleared during 2006 and the contents taken to KV10 (the tomb of Amenmesses) for conservation, documentation, and analysis, which is currently being carried out under the direction of Salima Ikram.

Objects recovered from this tomb include: 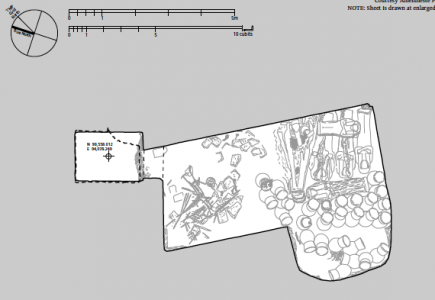