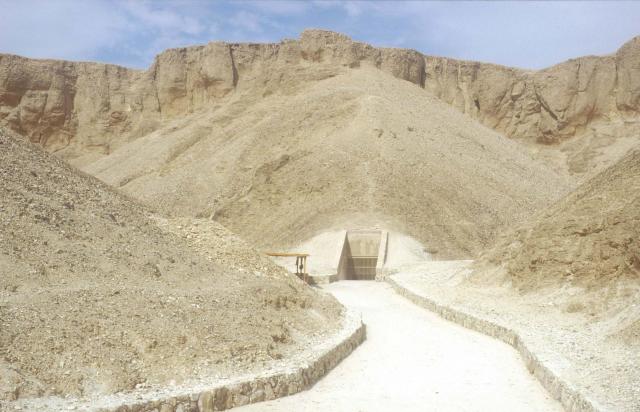 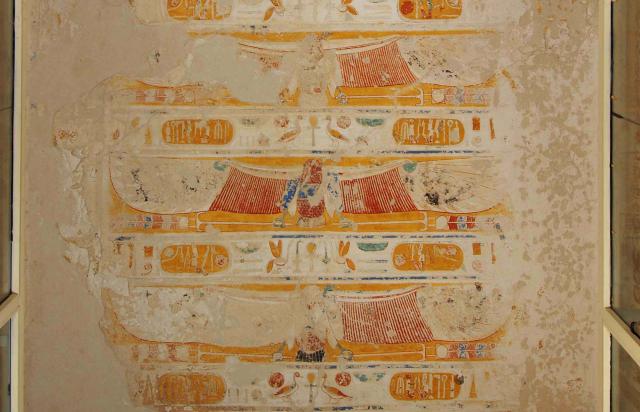 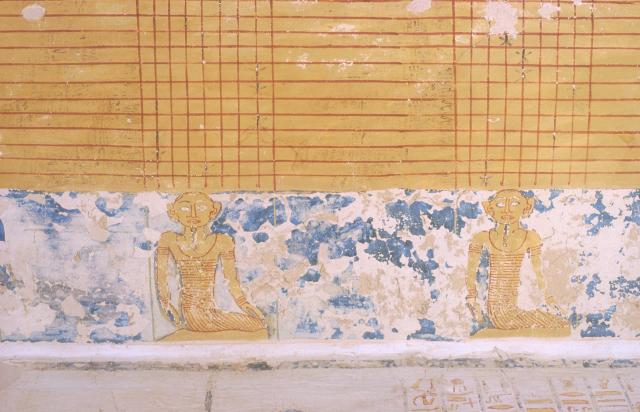 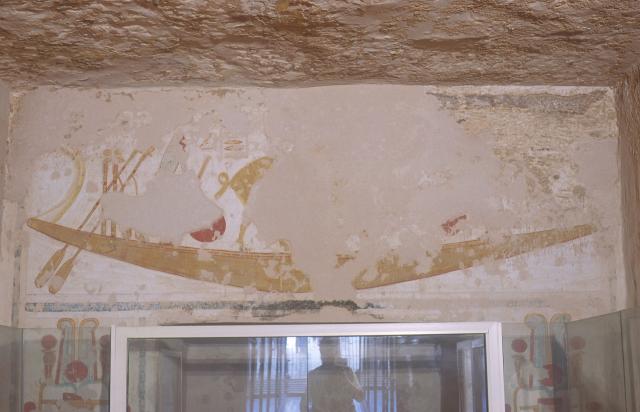 The tomb's entrance is cut in the end of the spur at the head of the first northwest branch inside the main wadi, just above the convergence of two water courses descending from the cliff face to the west and northwest. The sides of this open entry were plastered. Two short rubble walls run perpendicular to the beginning of the entry walls and a modern revetment of rubble has been added to the upper edges of the sides and across the top of the entry.

Pivot holes in the outer corners of the ceiling recess, and in the floor beyond the threshold of the gate, show that the entrance was originally closed by double doors. The outer face of the lintel displays the king's names in a horizontal row at the top, while below there is a large sun disk with a scarab and ram-headed man in the center. Kneeling figures of the king flanking the disk appear in this scene for the first time, followed by the standing figures of Isis on the left and Nephthys on the right. The reveals and thicknesses display the names of Rameses VII and there are traces of a winged figure and a winged sun disk on the soffit.

The decoration on the walls is painted sunk relief, and the ceiling is painted plaster. On the left (southwest) wall are three scenes. In the first, the king offers incense and libations to a seated figure of Ra-Horakhty-Atum-Khepri before offering stands bearing a sacrificial oryx, bouquets and food. The second scene is the initial scene and first division of the Book of Gates. The third is the Iwnmutef priest purifying the king as Osiris, derived from the Opening of the Mouth Ritual.

The right (northeast) wall also displays three scenes: the king offering incense and libations to Ptah-Sokar-Osiris; the first division of the Book of Caverns, and the Iwnmutef priest purifying the king as Osiris, again from the Opening of the Mouth ritual. A frieze of cartouches flanked by lion-headed uraei alternating with winged scarabs appears on each wall after the first scene.

The burial chamber has a barrel-vaulted ceiling. It was originally intended to be a second corridor. Evidence of this change can be seen in the uneven finish of the floor near the walls compared to the smoothness of the central area.

A two-tiered pit in the floor of the chamber, covered by a granite sarcophagus box, formed the burial place. The exterior sides and ends of the lid were incised and painted with the figures of Serqet, Neit, Nephthys, Isis and the four sons of Horus. Two semi-circular canopic jar emplacements were cut into the sides of the upper tier of the pit.

The front (southeast) wall shows Sekhmet-Bastet-Weret-Hekau on the left (northeast) side of the gate and Weret-Hekau on the right (southwest) side. The upper registers of the two side walls contain several enigmatic scenes. Both middle registers display scenes from the Book of the Earth, including four women kneeling before fans on the left (southwest) wall. The king faces gate K on either side of the rear (northwest) wall. A dado of kneeling bound enemies alternating with serekh-gates occurs on every wall.

The vaulted part of the ceiling is decorated with two elongated figures of Nut placed back to back and flanked by duplicate representations of circumpolar constellations and decans. The lower, flat portions of the ceiling contain a grid of stars above kneeling figures, representing star clocks.

Graffiti are found on the walls throughout the chamber. Many of the figures of deities have been damaged, particularly their faces, hands, and feet, most likely by the Coptic inhabitants of the tomb.

The lintel shows a winged disk, while the reveals and thicknesses give the king's names and titles. Door pivot holes show that this gate was intended to be closed with large wooden double doors. A step in the gate creates a descent from burial chamber J to chamber K.

This small chamber, unfinished at the time of the king's death, may have been intended as another corridor. There is evidence of beam holes in the right (northeast) and left (southwest) walls. The left and right walls show the king offering to Osiris, and presenting an image of Ma'at to Osiris. A central recess in the rear (northwest) wall is flanked by personified djed-pillars with sacrificial animals in between. At the top is an extract from the fifth gate of the Book of Gates depicting a pig and two apes in the sun boat. The ceiling is decorated with cartouches and squatting deities. Pivot holes in the floor and ceiling inside the gate attest to the presence of a double leaf door.

The entrance is cut into the base of a hill at the end of the first northwest branch wadi. This unfinished tomb comprises an open entryway ramp (A), corridor B, vaulted burial chamber J, and an unfinished chamber (K) with a rear recess. The walls are decorated with excerpts from the Book of Gates (chamber K), Book of Caverns (corridor B), Book of the Earth (burial chamber J), Opening of the Mouth ritual (corridor B), and the deceased with deities (corridor B, chamber K, burial chamber J). The ceilings are painted with motifs of flying vultures and astronomical figures. There are 135 Greek, and several demotic, Coptic, and nineteenth century graffiti in the tomb, indicating that KV 1 has been accessible since antiquity.

The conversion of the second corridor to a burial chamber is noteworthy. Its central two-tiered pit in the floor, provided with canopic jar niches in the sides, is unique. The figure of the king with the goddesses adoring the sun disk on the outer lintel of gate B is a first. This is one of the latest tombs to be cut in a side wadi. It was used as a dwelling by Coptic monks.

At the time of the king's death in his seventh regnal year, work on the tomb's third corridor (now chamber K) was abandoned and the second corridor was enlarged and became burial chamber J. A break in the end of the granite pit cover was made by robbers to gain access to the burial. The tomb was used by Christian monks or hermits as a dwelling.

In 1994, the Supreme Council of Antiquities cleaned the tomb's walls and filled cracks in walls and ceiling with plaster. Some ancient graffiti were covered over in the process. In the same year, the Supreme Council of Antiquities created a walkway from the paved road to the tomb entrance and built a wood shelter with cement benches nearby. A wooden floor, railings, and large glass panels have been installed throughout the tomb.

There are major cracks in the walls and ceilings of corridor B. The plaster is intact where it is not damaged by cracks, vandalism, or later graffiti. The paint is in good condition, although much blue pigment has fallen away. 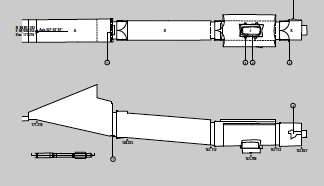 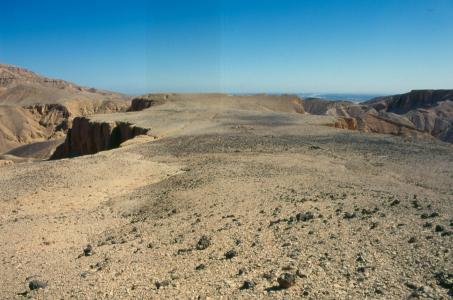 At the end of the New Kingdom, Egypt entered a period of political and economic decline.
Show More

Brock, Edwin C.  The Clearance of the Tomb of Rameses VII.  In: Richard H. Wilkinson (ed.).  Valley of the Sun Kings: New Explorations in the Tombs of the Pharaohs. Tucson: University of Arizona Egyptian Expedition, 1995.  Pp. 47-63.

The King of Upper and Lower Egypt, the strong one belonging to the Maat of Re, beloved of Amen, chosen by Re, son of Re, fashioned by Re, the father of Amen, the ruling god of Heliopolis