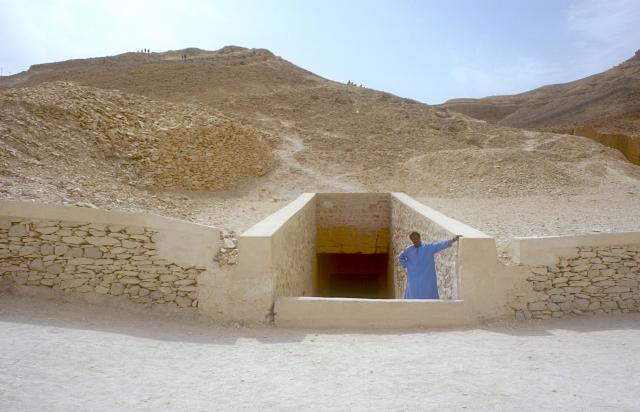 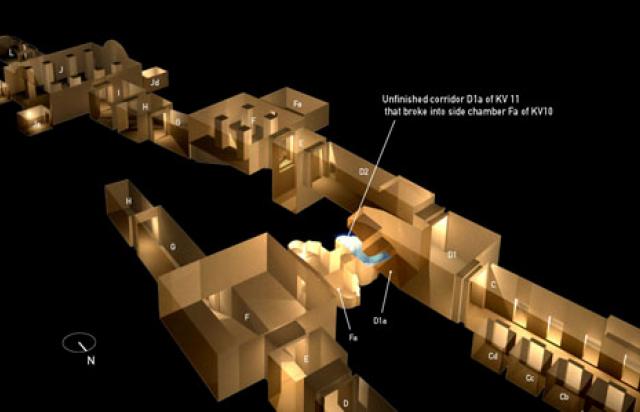 Until 2001, modern steps led down from the raised floor of the Valley to the beginning of the divided entrance stairs, which descend beneath an overhang to gate B. This modern construction was removed during excavation of the debris in front of the tomb as part of a search for foundation deposits, revealing that the hillside slopes down steeply from the beginning of the entryway towards the central valley floor.

The entryway is undecorated, but its sides are plastered, as is the underside of the overhang. Greek, Arabic, and modern European graffiti are present on the upper sides near gate B.

The gate has compound jambs. A ceiling recess in corridor B would have allowed the two door leaves to open inward. On the lintel is a sun disk between kneeling figures of Isis and Nephthys with cartouches of Amenmeses following. There are texts on the jambs, with winged Ma'at figures over the heraldic plants of Upper and Lower Egypt on the inner thicknesses of the gate. The right (west) outer jamb has sheared away and two horizontal notches show where it had been repaired in antiquity. All inscriptions and images on the lintel, reveals and thicknesses have been chiseled out.

The walls of this sloping corridor were decorated with a combination of raised relief for the first two scenes on the left (east) and sunk relief for the texts of the Litany of Ra. All of this decoration was subsequently erased and plastered over. Although most of this plaster and decoration has disappeared, traces of the original decoration can still be seen. Amenmeses appears with Ra-Horakhty at the beginning of the left wall, followed by the opening scene of the Litany of Ra (the sun disk between the serpent and crocodile) and the texts of this composition, which are continued on the right (west) wall.

Traces of plaster on the ceiling indicate it was once decorated with the motif of flying vultures alternating with the king's names. A winged sun disk decorates the rear of the ceiling recess.

This gate is undecorated.

This side chamber is undecorated.

There is a step down between the outer and inner thicknesses of the compound jamb of this gate. Traces of figures of Amenmeses and Hathor appear on the inner thicknesses. The figures show evidence of re-cutting.

Two large trapezoidal recesses lie opposite each other in the left (east) and right (west) walls of this sloping corridor. The walls are decorated with the Litany of Ra and include representations of the god's manifestations.

A step descends through the compound jamb of this gate. Traces of the king's names and epithets are on the thicknesses.

No well shaft was cut in the floor of this chamber. The left (east) wall was decorated with depictions of Osiris, Anubis, and Takhat making offerings to Atum, Horus, and Isis. The right (west) wall contained four scenes: Osiris; Takhat making offerings to Ra-Horakhty and Anubis; Takhat; and Anubis. Only a few traces of this latter decoration now remain. The original decoration in sunk relief showed representations of Osiris, the four sons of Horus, Isis, Neit, Nephthys and Serqet, Anubis and Horus-Iwnmutef.

A step descends through the compound jamb. Traces of the names of Amenmeses are still visible on the thicknesses.

This chamber contains four pillars, two on each side of a divided stairway. The pillars were decorated with Anubis jackals, the Sons of Horus, Serqet, and Mehit-weret in the re-use phase of decoration. Traces of Amenmeses's decoration include his cartouches on the center-facing sides and, on the front face of pillar 3 which also shows the head of the god Ptah.

The walls were decorated with scenes of Baketwerel making offerings to deities from the Book of the Dead over original reliefs depicting the fourth and fifth divisions (P)/fifth and sixth hours (H) of the Book of Gates. The rear (south) wall showed Queen Baketwerel led by Horus and Anubis before Osiris and Isis, and the Queen with ointment before Anubis and Hathor. Only fragments of the central scene of Baketwerel led before Osiris survive over remains of Amenmesse offering to Osiris and a goddess on the center of the rear wall. In the center of the right (west) wall lies a gate leading to a side chamber.

The divided stairway in this descent has not been completely excavated.

This gate has compound jambs.

This unfinished side chamber was to have two pillars, but they were only partially cut away from the bedrock. The sides of the chamber have been established in the front (east) part and the center of the ceiling was cut as far as the unfinished pillars. The floor is uneven and steps up to the sides and rear. The tomb cutters of KV 11 broke through the unfinished ceiling at the rear (west) of this side chamber.

This gate is located at the rear of the overhang covering the bottom of descent F. It has simple jambs and the soffit slopes downwards from front to back.

No decoration is preserved in this corridor. The ceiling is barrel-vaulted and many pieces have fallen from here after past floods. The concentration of broken burial equipment, such as pieces of a red granite sarcophagus lid of Takhat and fragments of canopic jars bearing her name suggest that this corridor may have served as a burial chamber.

This simple gate was badly damaged by past floods.

KV 10 is located in the main wadi. The tomb consists of an open entryway (A) followed by three corridors (B, C, D) with a small chamber off the right (west) wall of corridor B (side chamber Ba). No well shaft was cut into the floor of chamber E, and the cutting of side chamber Fa was never finished. Corridor G, following the pillared chamber F, has a vaulted ceiling. The next corridor (H) is unfinished, but would have led to a sarcophagus chamber, if completed.

The design of KV 10 from the entrance to pillared chamber F is similar to KV 8, although the corridors have a shallower slope. The tomb was originally decorated for Amenmeses, with raised relief on the lintel and jambs of gate B and in the entrance of corridor B. The remainder of the texts and figures were in sunk relief, extending as far as pillared chamber F. All of this decoration was subsequently erased and replaced with painted plaster scenes for Takhat and Baketwerel, with traces surviving in chamber E and pillared chamber F. Graffiti are inscribed near the entrance.

This tomb is an example of the re-use of a king's tomb for the burial of a queen with consequent extensive alteration of decoration. This tomb is also of interest because of the breakthrough by the cutting of KV 11.

KV 10 was cut during the reign of Amenmeses, but no evidence survives to indicate that he was interred in the tomb. At some later date, the tomb was usurped by Takhat, who bore the titles of king's daughter and great royal wife, and another queen, Baketwerel. The origins of these two royal women are not certain, but it is now thought that they are related to Rameses IX of Dynasty 20.

Early in Dynasty 20, workmen were excavating KV 11 for Setnakht. While digging corrridor D, they accidentally broke through the ceiling of side chamber Fa in KV 10. KV 10 has been partially open since antiquity, and there are Greek, Arabic, and modern inscriptions on the walls at the entrance to the tomb.

In several places on the walls and ceilings of the corridors and chambers, plaster patches and Avongard crack monitoring strips have been placed to indicate rock movement. To date, except for the badly broken "ceiling" of corridor H, no significant movement has been detected. In 1997, the low wall in front of KV 10 was raised to protect the tomb from floodwaters. Pillar 4 was replaced in 1998 with one built of limestone blocks, while pillar 1 was consolidated with a veneer of limestone slabs. Similar treatment was carried out in 1999 and 2000 on pillars 2 and 3.

As a result of flooding at various times over the centuries, since the tomb first was left open, much damage has occurred to the decorated plaster on the walls and ceilings, and even to the stone itself. Most of the painted plaster wall decoration of chamber E and pillared chamber F was destroyed in a flood in 1916 or earlier. Only a few fragments of painted plaster and carved limestone survive in KV 10. Numerous areas of ancient repairs made by the tomb builders to the walls, ceilings and floors are visible, usually mud, plaster and stone chips filling cracks.

The four pillars in pillared chamber F are severely damaged: pillar 4 is almost completely missing. Pillars 2 and 3 were detached from the ceiling and were held up only by the debris that surrounded them. Only pillar 1 is still relatively intact, although much of the surface of its lower half has broken away. Corridors G and H exhibit the most extensive damage, including large fissures, surface spalling and, particularly in corridor H, extensive ceiling collapse. 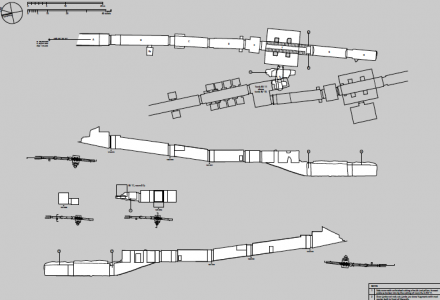 King of Upper and Lower Egypt, Enduring like Ra, Chosen of Ra; Son of Ra, Amen has Fashioned Him, Ruler of Thebes