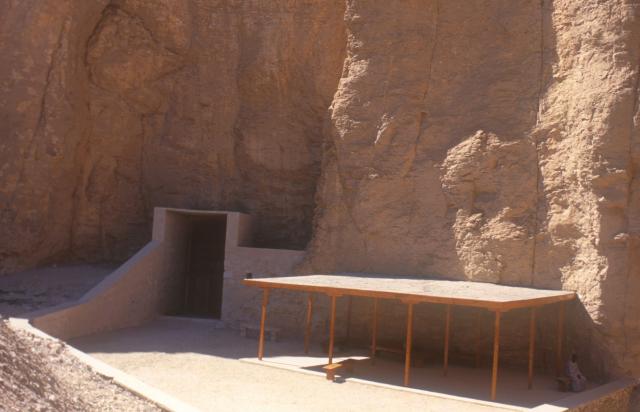 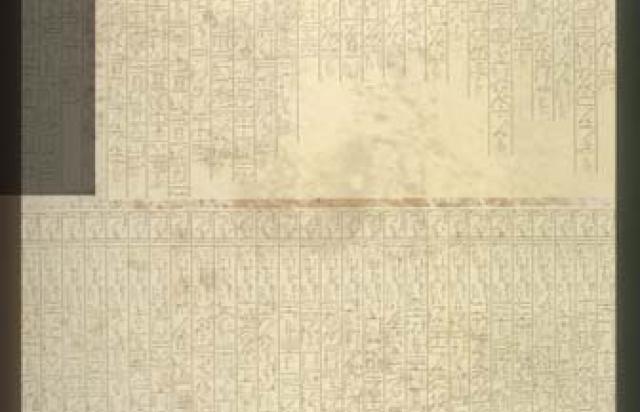 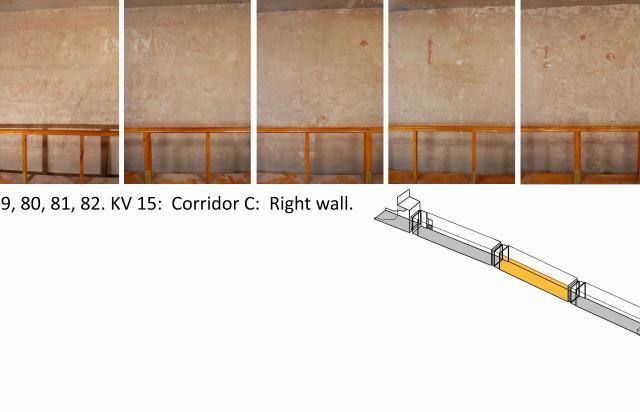 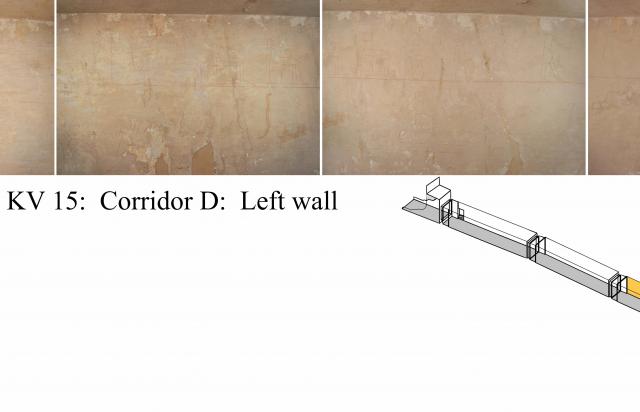 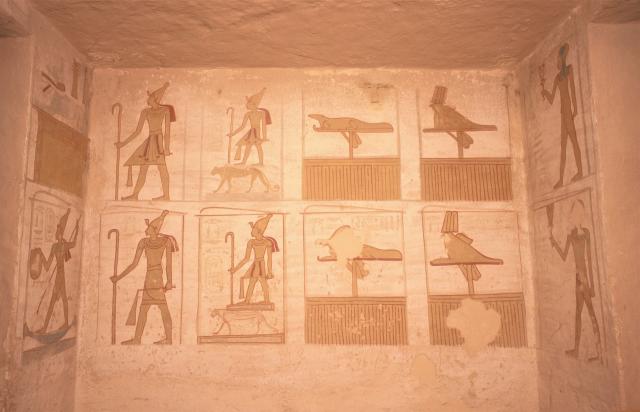 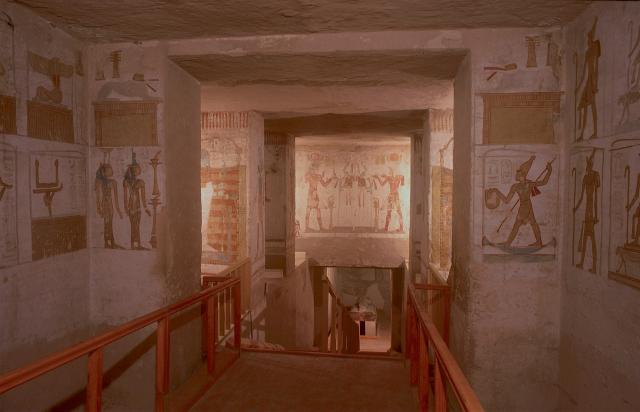 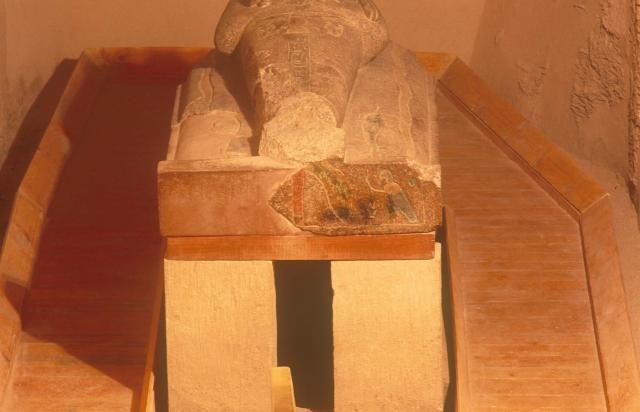 The entryway to KV 15 is cut directly into the mountain face rather than in a stepped manner which is typical of earlier tomb entrances in the Valley. The rubble walls of the entrance are covered with layers of white plaster. After the 1994 floods, a cement extension with roof was built out from the cliff face to protect the entrance.

The compound jamb of this gate is fitted with a set of door pivot holes, showing that it was once closed by a pair of wooden doors. There is a modern step in the descent from the entryway to corridor B. On the lintel over the doorway is a sun disk containing a scarab, and a ram-headed god is depicted between kneeling Isis and Nephthys. There are names of Sety II on the jambs, with Ma'at shown kneeling on the inner thicknesses.

The walls of corridor B are decorated with images of Sety II offering to Ra-Horakhty and Nefertem followed by the opening vignette of the Litany of Ra on the left (southeast) wall, and with Ra-Horakhty and Sokar, as well as the Litany of Ra on the right (northwest) wall. The sunk relief figures of the king and Nefertem found on the left wall of B behind the raised relief images of Sety II and Ra-Horakhty, have been cut over the erased opening vignette of the Litany of Ra. It was originally in raised relief, then recarved in sunk relief. The remainder of the corridor is inscribed with texts of the Litany of Ra. The ceiling displays texts of Osiris and Ra-Horakhty along the edges, with flying vultures (some with cobra heads) in the center, incompletely rendered in paint, alternating with the king's names.
A recess, perhaps the start of a gate, was cut through the first figure of the king at the beginning of the left wall.

The compound jamb of gate C is fitted with a set of door pivot holes, showing that it was once closed by a pair of wooden doors. The outer lintel bears a sketch of a winged disk and the reveals and outer thicknesses show the Litany of Ra.

This corridor has a shallow slope and lacks the usual wall recesses at its beginning. The decoration of the walls was done only as preliminary sketches in red paint. Sety II offers an image of Ma'at to Ra-Horakhty on the left (southeast) wall and incense to Sokar on the right (northwest) wall. The remainder of the walls show portions of the Litany of Ra, including the seventy-five forms of the sun god, as well as the second and third hours of the Imydwat on the left and right walls. The central portion of the ceiling is decorated with a sun disk containing the ram-headed bird representing the ba of Ra. It is flanked by Isis and Nephthys as kites, followed by more texts of the Litany of Ra. The unfinished remainder was to have been covered with stars.

The compound jamb of gate D is fitted with a set of door pivot holes, showing that it was once closed by a pair of wooden doors. The outer lintel displays a winged disk, the jambs and outer thicknesses contain the names of Sety II, and the inner thicknesses show Sety II. All decoration was done as sketches in red paint.

The walls are decorated with preliminary sketches of the fourth and fifth divisions of the Imydwat on the left (southeast) and right (northwest) walls respectively. Two rectangular recesses lie opposite each other near gate E.

Door pivot holes in the compound jamb of gate E show that it was once closed by a pair of wooden doors.

The well shaft was not cut. The usual protective deities associated with this chamber (four sons of Horus and four goddesses) have been replaced by images of various divine statues, similar to many of the actual wooden statues found in the tomb of Tutankhamen.

8 Photos
+0
See All Close
More images in this section

This pillared chamber contains two pairs of pillars flanking a central descent. A recess in the center of the left (southeast) wall, may be an unfinished cutting for a gate to the usual side chamber which is absent here. The west corner of the chamber has not been cut to floor level. The mummy currently displayed in a modern case to the right of the entrance is intrusive.

The walls display the fourth and fifth divisions (P)/fifth and sixth (H) of the Book of Gates. The pillars are decorated with Sety II, Horus-Iwnmutef, Ptah in a shrine and other deities. The center of the rear wall shows a double scene of Sety II offering an image of Ma'at and two vases to Osiris. The scenes were not completely painted, with only red and yellow pigment applied, except on the pillars and center of the rear wall, where green also was added.

33 Photos
+0
See All Close
More images in this section

The undecorated center descent is unstepped.

This corridor was hastily converted to a burial chamber at the time of Sety II's death. Its rough walls and ceiling were coated with plaster and decorated with paint. On the walls, Anubis jackals on shrines and two rows of deities representing the followers of Ra and Osiris are placed over a lower register of prone mummiform figures on snake beds taken from the fifth division (p)/sixth hour (H). A figure of Nut with downswept wings stretches along the length of the ceiling and traces of what may be the ba of Ra is painted above her head.

This simple gate has a flat soffit and a threshold that slopes downward from front to back. Pivot holes in the ceiling at the inner edge of the soffit show that the gate was closed with a pair of door leaves.

The entrance to KV 15, the tomb of Sety II, like that of his wife Tausert (KV 14), is cut directly into the vertical cliff face at the head of the branch wadi running southwest from the main valley. The tomb lies on a northeast-southwest axis, and consists of a short entryway (A), three long corridors (B, C, D), a chamber without a well shaft (E), a pillared chamber with a central descent (F), and a burial chamber (J) adapted from an unfinished corridor.

The entrance to the tomb was cut into the cliff with projecting rubble-built side walls. These walls were smoothed over with a layer of white plaster, as elsewhere in the tomb. The usual chamber off the right side of pillared chamber F is lacking here, although a rectangular recess in a comparable position in the left wall may mark the beginning of the door for such a side chamber. Also absent are the high trapezoidal niches at the beginning of corridor C. A rectangular recess, cut at some later date into the beginning of the first corridor's left wall, damaged the raised relief figure of the king. The slope of the entrance and the following corridors is minimal. The walls of the tomb are decorated with scenes from the Litany of Ra (corridor B, gate C, corridor C), the Imydwat (corridor C, corridor D), the Book of Gates (pillared chamber F, burial chamber J), and representations of the deceased and deities (corridor B, corridor C, gate D, chamber E, pillared chamber F, burial chamber J).

The first corridor is decorated in sunk and raised relief, but the decoration in the remainder of the tomb, probably completed after the death of the king, was done in paint alone. In the second and third corridors, only preliminary sketches were painted on a grayish-brown plaster surface. The scenes on the left walls of corridors C and D are oriented towards the rear of the tomb, while on the right walls they are oriented towards the entrance. Only in pillared chamber F is sunk relief again used, although not always painted, with white background. There is a marked stylistic difference between the decoration in pillared chamber F and the first corridors of the tomb, and even in the first corridor (B) stylistic differences may be seen between the raised and sunk relief.

The tomb is noteworthy for its decoration. Chamber E contains figures of divine statues. There are preliminary sketches of decoration in corridors B and C, and the king's names were inscribed, erased, and then reinscribed on gate B and in corridor B. Also, the entrance cut directly into the cliff is significant.

The history of KV 15 is not fully known. It has been suggested that the decoration of gate and corridor B was interrupted, perhaps during the reign of Amenmeses, if that king did indeed reign concurrently with Sety II rather than prior to him. There is definite evidence of the erasure of Sety II's names followed by their recarving, and these deletions may have taken place either during the usurpation of Amenmeses or during the reign of Siptah and later restored by Tausert.

Altenmüller believes that the body of the king was initially interred in KV 14 with his wife, Tausert, then reburied by Setnakht in the abandoned KV 15, which was then quickly finished. Whether this was so, or the king was initially buried in his own unfinished tomb, the body was later removed and placed in a coffin in the KV 35 cache. Over sixty Greek and other graffiti found on the walls of the tomb show that it remained open throughout the later Graeco-Roman period.

Breaks in the walls have recently been filled in by Supreme Council of Antiquities restorers. The local antiquities inspectorate has constructed a covered extension to the entrance to protect the tomb from future flooding since the entrance is located beneath the site of a waterfall. Inside the tomb, wooden walkways and fluorescent lighting are being installed.

Much of the painted decoration is intact and the plaster appears to be relatively stable, but only the well-preserved relief in pillared chamber F was ever painted. 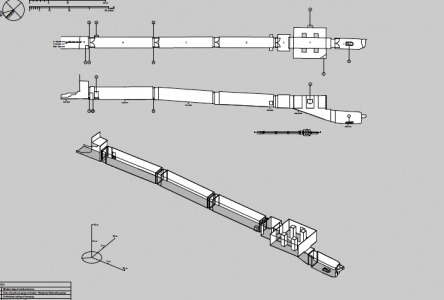 Dodson, Aidan.  The Decorative Phases of the Tomb of Sethos II and their Historical Implications.  Journal of Egyptian Archaeology 85 (1999): 131-142.

Lucas, Alfred.  Note on the Temperature and Humidity of Several Tombs in the Valley of the Tombs of the Kings at Thebes.   Annales du Service des Antiquités de l’Égypte 24 (1924): 12-14.

King of Upper and Lower Egypt, Powerful of Manifestations is Ra, Chosen of Ra; Son of Ra, He who Belongs to Set, Beloved of Ptah