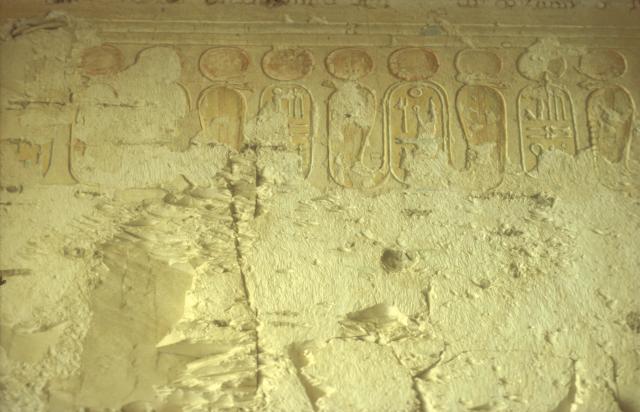 Seven modern steps descend from the present valley floor to the entryway, which gently slopes toward gate B. A modern retaining wall has been erected around the sides and ends of the entryway.

An overhang protrudes above the lintel of this decorated gate. There are traces of the cartouches of Rameses III on the thicknesses, partly covered by the frame of a modern metal gate. Remains of a winged sun disk decorate the lintel.

Images of Rameses III preceding figures of the prince can be seen on the walls where they were cut through the plaster coating into the rock beneath. The preserved traces show a sequence of at least three scenes on each side, consisting of the prince behind the king facing a deity. On the left (north) wall, the deities are Ptah, a damaged figure, and Osiris. On the right (south) wall they are Ra-Horakhty, Thoth, and a damaged figure. At the top of each side of the corridor a frieze of cartouches of Rameses III is flanked by pendant uraei. There is a rectangular cutting, the start of a chamber (Ba) in the left (north) wall, and the gate to a cut side chamber (Bb) in the opposite wall.

This partially cut gate would have led to a side chamber which was never cut.

Because of the loss of plaster, we do not know if the gate was once decorated.

The side chamber is located to the right (south) of corridor B. We cannot determine if it was once decorated.

Some of this gate's decoration has been lost. Traces of vertical columns of a dedication text appear on the reveals, and a winged sun disk decorates the lintel.

The decoration has now been completely lost. Two pairs of pillars flank the central axis. Gate Fb in the center of the right (south) wall, directly opposite gate Fa, represents the start of the cutting for another side chamber. There are traces of ancient repairs on the ceiling.

The side chamber is located to the left (north) of pillared chamber F. There is no trace of decoration.

An abandoned start for the cutting of the gate shows that a chamber was intended to follow.

This very wide but shallow chamber has a vaulted ceiling. There are no surviving traces of decoration. The ceiling is blackened by soot.

This gate has no lintel; the jambs reach the vaulted ceiling extending from chamber G to chamber H. No traces of decoration are found.

This very wide but shallow chamber has a vaulted ceiling. There are no traces of decoration.

No traces survive to show if this chamber was decorated.

KV 3, located in the first southeast branch off the main wadi, resembles in plan tombs of royal family members of Dynasty 20 in the Valley of the Queens. Its open entryway (A) leads to a corridor (B) from which side chambers were to open off each side (Ba, Bb). Only the right (south) side chamber Bb was fully cut; a cutting on the left (north) marks the beginning of the gate and side chamber Ba. A pillared chamber (F) follows on the main axis, also with side chambers (Fa, Fb). Here, the left (north) side chamber Fa was completed, while on the right (south) Fb is represented only by the abandoned gate cutting. On the same main axis, three smaller chambers (G, H, J) occupy the rear; the first two have vaulted ceilings.

This is one of the few decorated tombs of a prince in the Valley of the Kings. It has two narrow rear chambers, with vaulting at ninety degrees to the usual form.

An ostracon in the Berlin Museum (Berlin Ostracon P.10663) records that in regnal year 28 of Rameses III a group of workmen went to the Valley of the Kings to "found the [tomb] of a prince of His Majesty." The tomb may be KV 3, but the name of the prince is unknown, although some have suggested that it was intended for the prince who succeeded his father as Rameses IV. There are no indications that the tomb received a royal burial. Bricks and remains of sandstone columns indicate that KV 3 was used as a Christian chapel during the Byzantine Period.

A rubble revetment was constructed around the entrance, together with a wall across the entry. A metal gate has been installed in gate B, partly covering inscriptions on the thicknesses.

The painted plaster wall decoration has almost entirely fallen away except near the ceiling in corridor B. A coating of smoke from recent burning of trash in the corridor entrance has damaged the ceiling. 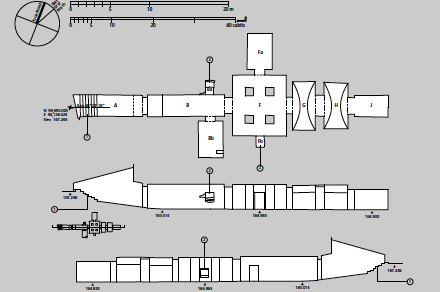