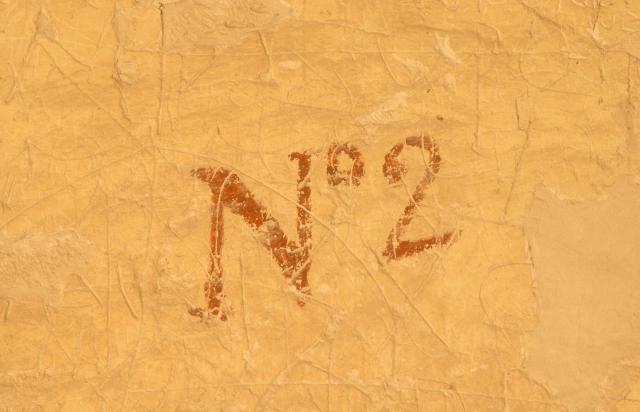 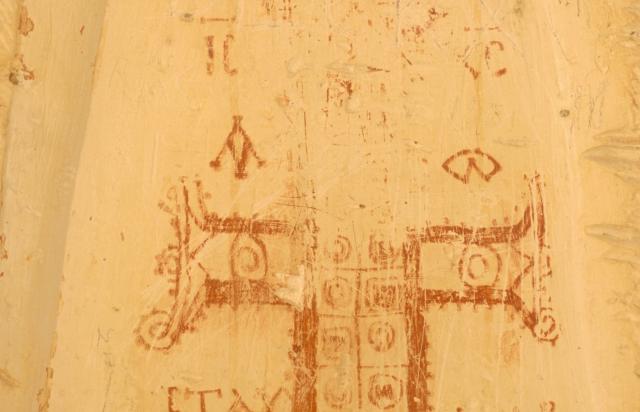 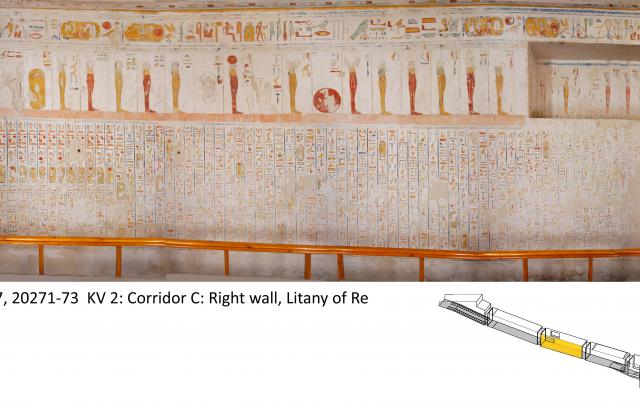 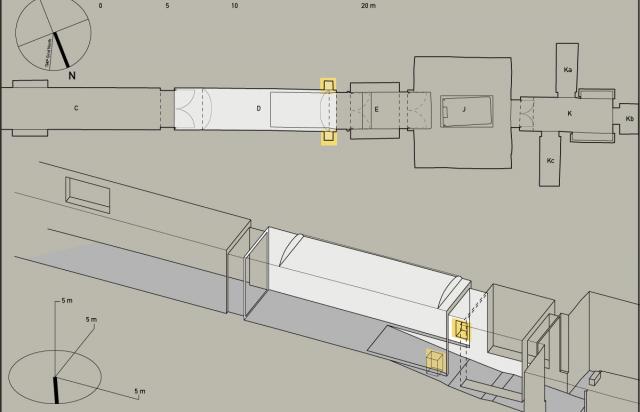 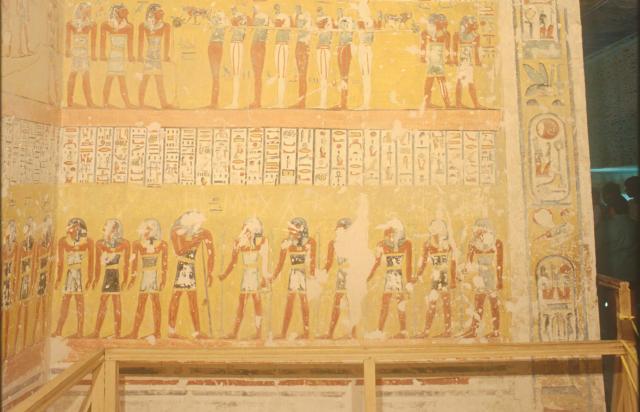 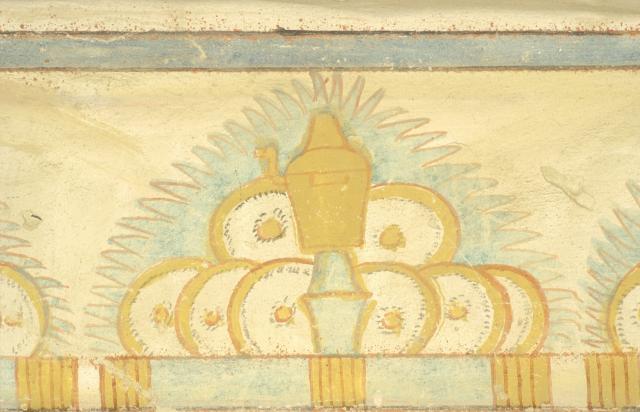 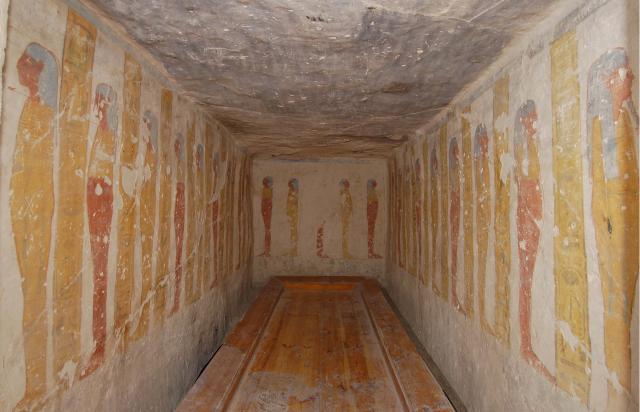 The open entryway has steps divided by a central ramp descending to gate B. The upper edges of the cutting for the entry were augmented during construction with rubble walls. A modern support constructed at the outer end of the damaged overhang gives the erroneous impression of a second outer set of door jambs. A crack in the overhang has been filled in. Various graffiti, including Coptic texts, are located near the first gate. Nine foundation deposit pits were located, two pairs on either side of the entry and one on the axis. However, only the axial pit and the two pair closest to the tomb door contained objects.

6 Photos
+0
See All Close
More images in this section

Door pivot holes are present at the rear of the lintel at the beginning of the ceiling recess in corridor B, and there also are pivot holes beyond the step down from the threshold at the start of a flat landing. These features indicate that two wooden door leaves once closed the gateway. The sun disk in the horizon is shown on the outer lintel of the door leading into the tomb. The disk contains a scarab and the ram-headed form of the sun god Ra and is flanked by the king's cartouches and kneeling figures of Isis and Nephthys. On the jambs and thicknesses are the king's names executed in sunk relief.

The decoration on the left (south) wall shows the king before Ra-Horakhty, the opening vignette of the Litany of Ra, followed by the text of that composition continued on the right (north) wall. On the ceiling are alternating depictions of vultures, falcons, winged scarabs and the king's names. There is either an artist's sketch or graffito of a man with a staff on the beginning of the left wall. A concentration of graffiti, many Coptic, is present in this corridor. These include prayers, saints' figures, and magical emblems (crosses, stars, knots). There are three hieratic graffiti, including one of the Dynasty 21 official Penamen which may record the inspection that led to the reburial of the mummy of Rameses IV.

Door pivot holes in the floor and ceiling inside the lintel and threshold indicate that the gate was closed by a pair of wooden door leaves. There is a step down from the threshold to the floor of corridor C. There is a winged sun disk on the outer lintel, a vulture with spread wings on the soffit, and the king's names and titles on the reveals and thicknesses.

A pair of rectangular recesses are cut high in the walls near the beginning of the corridor. Manifestations of Ra decorate these recesses. These figures also continue as a register above the texts of the Litany of Ra, which cover both walls of this corridor. Frieze texts elaborate on the king's names and titles. A disk containing the ba of Ra, flanked by Isis and Nephthys as kites, and followed by further manifestations of Ra, adorns the central length of the ceiling. The remainder of the ceiling is decorated with a star pattern.

On the outer lintel is a winged disk. The door jambs and thicknesses bear the king's names. Door pivot holes are found in the floor and ceiling inside the lintel and threshold and indicate that the gate was once closed by a pair of door leaves. There is a step down from the threshold to corridor D.

This corridor features a vaulted ceiling and a pair of vertical recesses set low at the rear ends of the walls. A ramp was cut into the rear half of the level floor and descends through E gate to chamber E. On the right (north) and left (south) walls are the first and second divisions of the Book of Caverns. The ceiling is decorated with the king's names surrounded by the star pattern. The vertical ends of the vault show pairs of winged uraei flanking the cartouches of the king.

The outer lintel displays a winged sun disk and a vulture with outspread wings is on the soffit. The reveals and thicknesses are covered with the king's names. A circular hole was cut in each thickness near the inner edge, probaly for door bolts. There are door pivot holes in the ceiling inside the soffit, but none are preserved in the sloping ramp, and it is uncertain how the gate would have closed.

Although no well shaft was ever cut, the floor level has been lowered by a descending ramp that begins in the floor of corridor D and ends in burial chamber J. The level of the original floor is preserved now as a bench on either side of the ramp. Texts from the Book of the Dead, including spell 125, which deals with the judgment of the dead, are inscribed on the walls in seventy-four columns.

A ramp was cut through the original threshold of the gate and still can be seen at the bottom of the inner thicknesses of the compound jambs. Door pivot holes are found inside the soffit, but not on the ramp surface, and it is not certain if the gate was closed by door leaves. On the outer lintel is a winged disk, and a vulture with spread wings is on the soffit. The reveals and thicknesses bear the king's names.

The burial chamber, located where normally would have been pillared chamber F, reflects an alteration of the traditional royal tomb plan resulting from an apparent need to finish the tomb prematurely. A ramp descends from corridor D through chamber E to the floor of the chamber which was cut one meter (three feet) lower.

The background color of the walls is a rich golden yellow, with the figures and texts executed in multiple colors, and with the texts on a white background. The decoration of the walls of the burial chamber is executed in sunk relief and consist of excerpts from the first three divisions (P)/opening scene and first two hours (H) of the Book of Gates. The composition begins with the first division on the right side of the front (east) wall and continues clockwise around the walls of the chamber. Two frieze texts beginning on the rear (west) wall and ending on the front wall give excerpts from the sixth and ninth hours of the abbreviated version of the Imydwat. Two elongated Nut figures decorate the center of the ceiling enclosing part of the Book of the Night on the right (north) half and the Book of Nut on the left (south) half, where a centrally placed figure of Shu with upraised arms supports Nut.

13 Photos
+0
See All Close
More images in this section

Door pivot holes inside the soffit at the beginning of a ceiling recess show that the gate was closed with a pair of wooden door leaves. The outer lintel panel displays the king's names in the centre, flanked by figures of a falcon with outspread wings standing on the sign for gold and presenting the symbol for the heb seb or jubilee festival. The king's names again are repeated as vertical columns on the door jambs and thicknesses.

There is a gate in each side wall leading to a side chamber. Beyond each gate is a two-tiered recess. A gate in the rear wall leads to a small side chamber. The walls of the corridor are painted with columns of text from the Book of Caverns. Images of enshrined gods below offerings are painted in the recesses. On the ceiling, a central text band gives the king's names and epithets and is flanked by stars.

The gate leads into side chamber Ka.

The walls are decorated with mummified figures of the king.

On the outer lintel is a depiction of the sun god Ra's bark poised over a double sphinx, the personification of Aker. The jambs and thicknesses are decorated with the kings names and epithets.

Situated at the rear of corridor K is a side chamber extending west. On the side walls are depictions of a couch and stool set between shrines. Below are canopic jars. The rear wall bears representations of two goddesses making a nini gesture.

The gate leads into side chamber Kc.

The walls of this side chamber, located off the right (north) wall of corridor K, are decorated with mummified figures of the king representing shabti figures.

The original plan of the tomb was altered after the death of the king, and the chamber which would have been pillared chamber F was used for burial chamber J. Two plans of the tomb are known: a plan of the whole tomb drawn on a papyrus now in the Turin Museum (Cat. 1885), and a sketch of the doorway of the tomb on an ostracon found in the rubble at the entrance.

Notable architectural features of this tomb include: the barrel-vaulted ceiling of corridor D; the ramp through the floor of corridor D, gate E and chamber E; the conversion of a pillared chamber into a burial chamber; side chambers and recesses off the rear corridor K. Also unusual are the number of foundation deposit pits, although not all were used. Decoration unique to this tomb includes the representation of Shu and Nut from the Book of Nut on the ceiling of burial chamber J, the mummiform figures in Ka and Kc, and parts of the Book of Caverns, which appear for the first time in the Valley of the Kings. KV 2 is one of the few tombs for which an ancient plan has survived.

The tomb was frequently visited in antiquity, and graffiti are scattered throughout the tomb. In general, each visitor left his name, his profession, his origin, and personal comments about the tomb. There is a significant number of Coptic graffiti, including representations of saints and Coptic crosses.

The construction of the pillared chamber was cut short at the king's death when little beyond the pillared chamber was completed. That chamber was converted into a burial chamber, the pillars removed, and the floor lowered to accommodate the massive sarcophagus. Later, after vandals had disturbed the burial, the king's mummy was reburied in a re-used coffin in the cache in KV 35. KV 2 has been open since antiquity. There are over seven hundred Greek and Latin graffiti throughout the tomb. Over fifty Coptic graffiti show that the tomb was used during the Byzantine Period. During the first half of the nineteenth century, the tomb was often used as a dwelling by European explorers investigating the Valley.

Work by the Egyptian Antiquities Association/Supreme Council of Antiquities included in-filling of cracks and holes in walls and ceiling, the cleaning of painted decoration, the installation of new lighting, wooden walkways and glass panels.

KV 2 was spared floodwater damage, and the painted decoration on the walls is well-preserved. 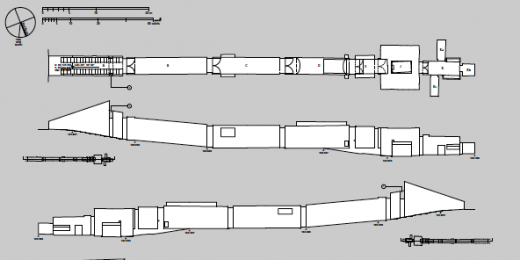 King of Upper and Lower Egypt, Ruler of Justice Like Ra, Chosen by Amen; Son of Ra, Ra Has Fashioned Him, Beloved of Amen