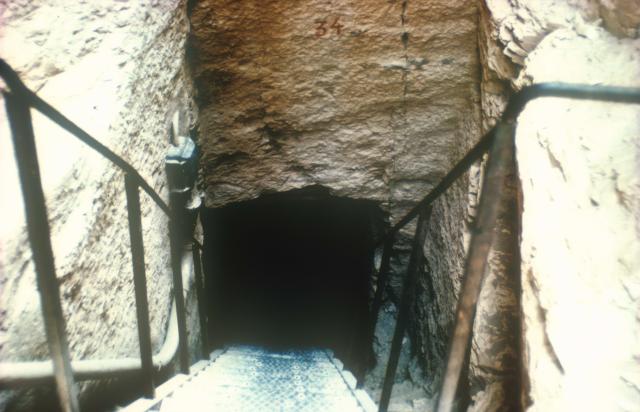 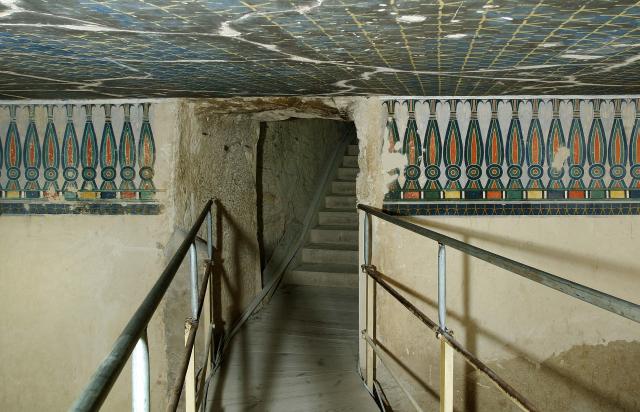 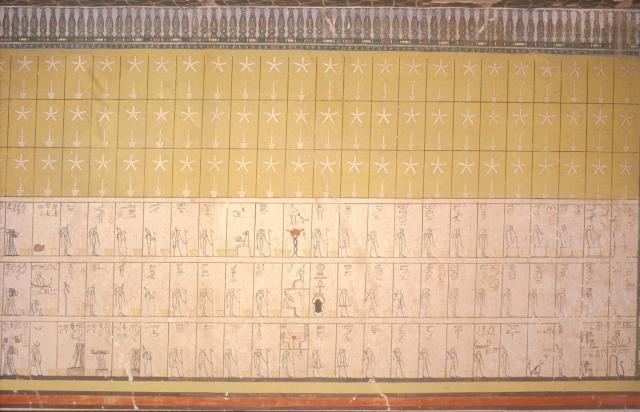 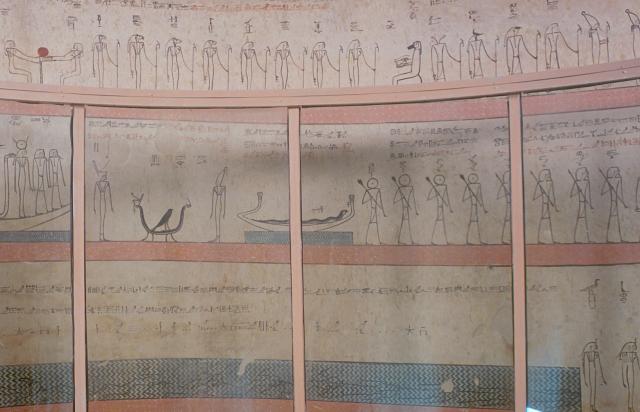 This roughly cut entryway lies high in the cleft of the hill south of the Valley of the Kings. A steep staircase descends deep into the mountain. Foundation deposits were found near the tomb.

The stairs of this gate are irregular and badly damaged.

There is a small bench cut immediately before the left (east) jamb of gate C.

This gate continues the slope from corridor B to chamber C, and begins the steps in stairwell C. The west jamb was cut back.

There are roughly cut recesses in the walls of this stairwell. The staircase is poorly preserved.

The slope of this simple gate continues in corridor D.

This corridor is very steep. There is a landing at its end.

The well chamber is well cut. Its ceiling and walls are plastered and partly decorated.

This large unfinished chamber contains two pillars in its center. The walls meet at oblique angles. Walls and ceiling are covered with plaster. The wall decoration is unique: it lists 741 divinities of the Imydwat, a motif which is not found elsewhere. A descent descends through the floor of pillared chamber F to gate J.

Possible beam holes are cut at the top of this descent.

The stairway from descent F continues through this simple, undecorated gate.

Two partially decorated pillars stand in the center of this large burial chamber. The cartouche-shaped sarcophagus of Thutmes III rests in the rear (northeastern) end of the chamber. The gates to two of the four side chambers are cut close together in the left (northwest) wall. Two others are spaced farther apart in the right (southeast) wall.
The sections of the Imydwat are arranged on the walls of the burial chamber starting with the first three hours to the right of the entrance which itself is flanked by two halves of the fourth hour. The two pillars in this chamber are decorated with figures representing the seventy-four forms of the sun god found in the Litany of Ra, and texts from an abridged version of the Imydwat. In addition, there are two unusual scenes showing the king and members of his family, including a detail of Thutmes being suckled by a tree that personifies Isis. Figures and texts are done in a cursive fashion more appropriate to papyrus.

There is a door bolt hole in the left (southwest) thickness of this gate.

This trapezoidal side chamber lies to the left (northwest) of burial chamber J.

The threshold of this gate is raised above the floor level of burial chamber J. There is a door bolt hole in the left (southwest) thickness of the gate.

The floor level of gate Jc is approximately 70 cm (27.5 inches) above that of burial chamber J. There is a door bolt hole in the left (northeast) thickness of the gate.

This roughly cut trapezoidal side chamber lies beyond the left (southeast) wall of burial chamber J and its floor is approximately 70 cm (27.5 inches) above that of the burial chamber.

There is a door bolt hole in the left (northeast) thickness of the gate and a lintel beam slot at the top of each thickness.

This roughly cut side chamber lies beyond the right (southeast) wall of burial chamber J.

The tomb of Thutmes III, KV 34, was cut into the base of a water-worn cleft above the cliff face at the head of the southernmost wadi in the Valley of the Kings. The architecture of KV 34 represents a transition in royal tomb design. A steep entryway (A) gives access to a corridor (B), a chamber with central descent (C), and a second corridor (D), leading to a well chamber (E). The trapezoidal chamber F beyond the well has two central pillars and a stairwell at the northern end that descends to burial chamber J.

Well chamber E is an innovation, which is found in the tombs of Thutmes III's successors. The cartouche-shaped burial chamber J is unique, with the first complete version of the Imydwat and the earliest version of the Litany of Ra on its walls.

According to Romer (see bibliography), the tomb was constructed in nine phases, some of which included the completion or repair of decoration following the king's burial. Gates C, D and F were enlarged in an attempt to emplace the larger items of funerary furniture. The decoration in burial chamber J was probably not applied until after the death of the king, when the burial preparations were in progress. Before the closure of the tomb, the decoration of well chamber F, which had been damaged when the doorways were enlarged, was repainted.

The tomb was plundered in antiquity, and the sarcophagus, as well as many of the remaining objects, were found damaged. It appears that two of the side chambers were anciently cleared of their original contents. Some have theorized that this may indicate that they served as temporary caches for mummies as was done in KV 35. The badly damaged mummy of Thutmes III, which was removed and rewrapped during Dynasty 21, was found in its original outer coffin in the Dayr al Bahri cache, TT 320, in 1881. Two damaged mummies found in KV 34 were also disturbed, indicating that the tomb was entered again after their burial.

The Supreme Council of Antiquities has installed glass panels along the burial chamber walls to prevent tourists from touching them, and wooden flooring to protect the stone floors and aid in preventing dust accumulation. It has moved the sarcophagus box to its ancient position over a plinth of calcite blocks and placed the repaired lid on the box. Fans have been installed in the lower chambers in an attempt to reduce the build-up of humid air.

Water entered the tomb in the 1994 flooding and collected in the bottom of the well, where it was absorbed by unexcavated debris and increased the humidity level in the tomb. 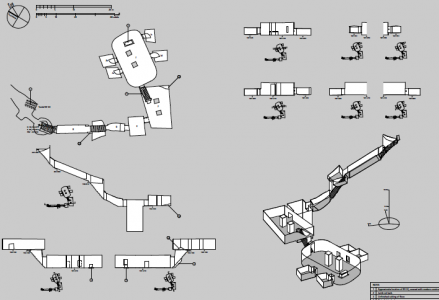 Knowledge of the early stages of New Kingdom royal tomb development is hampered by a lack of evidence.
Show More