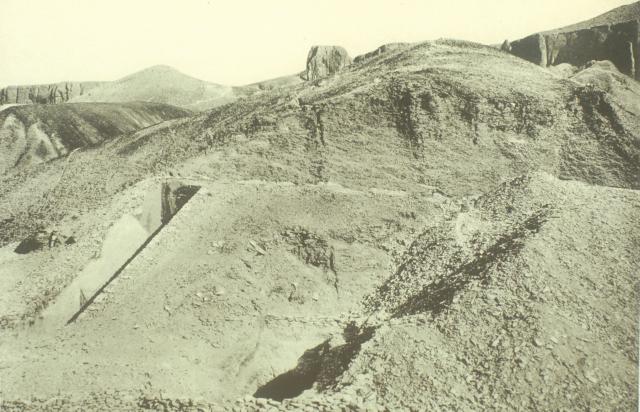 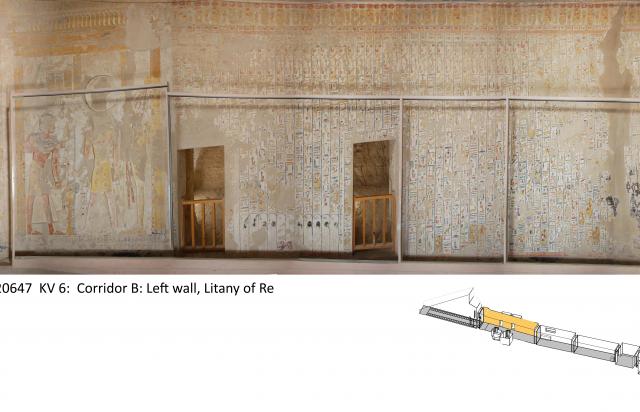 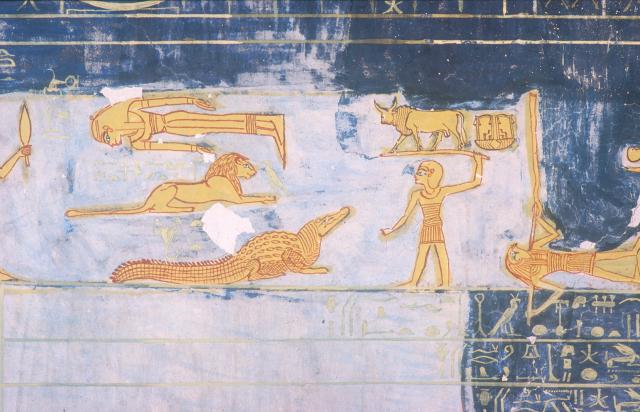 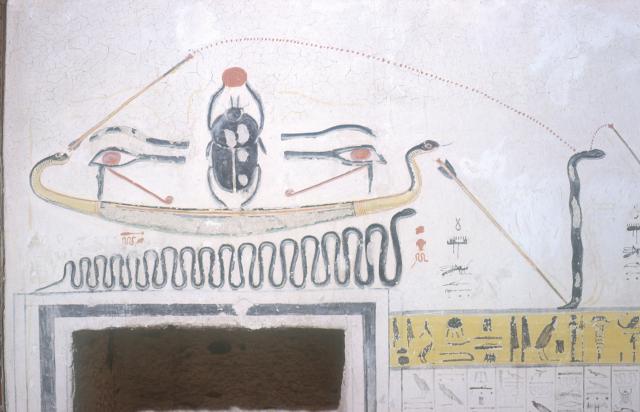 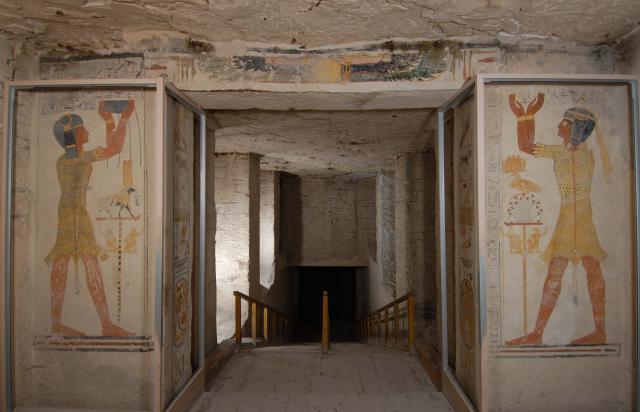 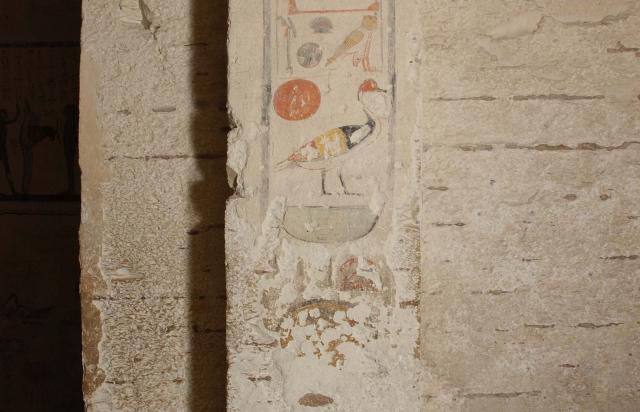 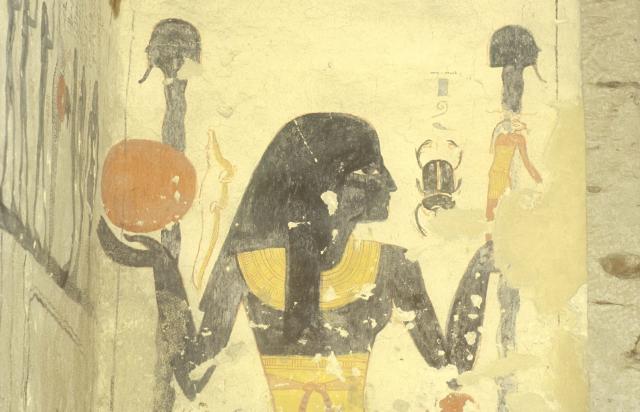 A divided stairway makes a shallow descent from the beginning of the entryway to gate B. The bases and lower shafts of two pilasters are partially cut into the left (northeast) and right (southwest) walls, beneath the overhang before gate B. The names and epithets of Rameses IX in long cartouches rendered in red and black paint appear on the partly cut pilasters on the left and right walls. This is one of the largest entryways in the Valley of the Kings.

8 Photos
+0
See All Close
More images in this section

On the lintel of gate B, Rameses IX adores a solar disk containing a scarab with Isis on the left and Nephthys on the right. A variation on the scene occurs here with the head and arms of Nut shown above the disk. There are two steps down from the gate to corridor B and a flat landing beyond. There are nineteenth century graffiti on the outer lintel.

There are two gates each in the left (northeast) and right (southwest) walls of this corridor that lead to small side chambers. The depiction of a door leaf with a guardian serpent is placed on each side of the corridor, immediately following gate B. A ceiling recess behind the gate shows that the gate was intended to have a door.

The left wall has three scenes: Rameses IX in a kiosk consecrating offerings before Ra-Horakhty and Osiris; a portion of the Litany of Ra, but lacking the opening vignette; and the Iwnmutef priest purifying Osiris from the Opening of the Mouth ritual. The right wall shows another kiosk with Rameses IX censing and libating over a white oryx and floral offerings before Amen-Ra-Horakhty with four ram's heads and Meretseger depicted as the Western Goddess. The first division of the Book of Caverns follows on this wall, but lacks the opening vignette of the sun disk and the large figure of the ram-headed sun god. A frieze of the king's cartouches with the prenomens flanked by lion-headed uraei is located on each wall following the kiosk scenes. The ceiling is decorated with vultures alternating with winged scarabs and the king's names.

This small, undecorated side chamber is the first on the left (northeast) side of corridor B.

This small, undecorated side chamber is the second on the left (northeast) side of corridor B.

This small, undecorated side chamber is the second on the right (southwest) side of corridor B.

This small, undecorated side chamber is the first on the right (southwest) side of corridor B. The chamber is unfinished.

Door pivot holes on both sides of the gate show that large, double wooden doors once closed the gate. The lintel displays a solar disk containing a ram-headed god between a kneeling female figure and a baboon. The disk is flanked by kneeling figures of Rameses IX, who is protected by the wings of large falcons. There is a winged sun disk on the soffit and the king's names and epithets appear on the reveals and thicknesses.

Two horizontal, rectangular recesses lie opposite each other high on the left (northeast) and right (southwest) walls of this corridor. On each side the initial decorative motif is a door leaf with guardian serpent. A frieze text in large hieroglyphs giving the king's names and epithets is placed above the scenes on each wall. The left wall is decorated in two registers. The first contains figures and text from the Litany of Ra, followed by a portion of the upper register of the second hour of the Imydwat and Book of the Dead spell 126. The second shows three scenes: Rameses IX followed by Hathor holding the royal names; the text of Book of the Dead spell 125; and Rameses IX adoring Khonsu-Neferhotep-Shu. Scenes on the right wall include a ram-headed god and the second to fourth divisions of the Book of Caverns, including Rameses IX offering libations to Amen-Ra. The corridor contains an astronomical ceiling with representations of constellations, a list of decans, and star tables.

There are door pivot holes on both sides of the gate. On the lintel is a solar disk with a ram-headed god between a Horus-eye and a baboon, flanked on each side by Rameses IX with four gods (Shu, Geb, Osiris, and Horus) and five goddesses (Isis, Nephthys, Neit, Serqet, and Hathor). On the soffit, there is a vulture. The king's names and epithets appear on the reveals and thicknesses.

At the end of this corridor are two, low vertical recesses, opposite each other in the left (northeast) and right (southwest) walls. Immediately following gate D are representations on each wall of a door leaf with guardian serpent. The left wall contains excerpts from the second and third hours of the Imydwat in three registers. Scenes on the right wall include Rameses IX offering the image of Ma'at to Ptah and Ma'at and a recumbent mummiform figure of Rameses IX as Osiris with a disk and a scarab. This is followed by an enigmatic scene unique to this tomb: a row of inverted men in circles, depicted in the three registers. In the upper register, the circle of men is shown with female figures on mounds alternating with serpents; in the middle register the men are shown with a group of serpents and the sun bark; and in the lower register the men are with female figures standing on serpents, figures bending over backwards, a group with mummiform figures, and a disk from which two scarabs emerge. Kneeling captives are depicted at the base of both walls. On the ceiling are scenes related to the Books of Day and Night but with additional enigmatic material.

The reveals and thicknesses of this gate are decorated with the names of Rameses IX.

No well shaft has been cut in the floor of this chamber. Only the rear (southeast) wall is decorated and shows the Iwnmutef priest on either side of the gate with different ritual objects associated with the Opening of the Mouth ritual.

There are door pivot holes on both sides of this gate. They show that large, wooden double doors were to close the gate. On the lintel is a winged disk, and on the thicknesses of the gate and its right reveal are the king's names.

This pillared chamber contains a pair of pillars on each side of the center descent. The chamber was not decorated and the cutting of the chamber was not finished beyond the first two pillars. An outline for a door has been drawn in black paint on the right (southwest) wall near the entrance. Rows of dots on both side walls indicate wall smoothing procedures were in progress. A hieratic docket painted on the right wall was recently covered by restorers patching and filling the unfinished carving of this chamber.

This center descent consists slopes from the floor of chamber F to gate J. The lower end of the descent flattens out as a landing before gate J. A short, sloping ceiling extends from the rear wall of F to gate J and has a slot for a lintel beam at the bottom of the overhang. The side walls are undecorated.

The rectangular burial pit and sarcophagus emplacement in the floor of burial chamber J are aligned on the axis of the tomb. The pit is shallow and made wider at the top by a shelf along each edge. The entire ceiling is vaulted.

The goddess Nut and a mummiform Osiris from the fifth division of the Book of Caverns flank the gate in the front (northwest) wall. The left (northeast) and right (southwest) walls contain scenes from the Book of Caverns and Book of the Earth. The rear (southeast) wall is divided into two registers. The upper shows gods before Rameses IX who is in a bark with divinities, and the lower shows Horus reviving the king as Osiris in a shrine accompanied by protective deities. The ceiling is decorated with two elongated figures of Nut bent over abbreviated versions of the Books of Day and Night, preceded by a panel showing the ram-headed sun god in a disk adored by two pair of baboons.

18 Photos
+0
See All Close
More images in this section

Door pivot holes on both sides of the gate show that wooden double doors were to be installed here. Two steps descend through the gate to chamber J. On the jambs and thicknesses of gate J are the King's names.

The entrance to the tomb of Rameses IX, located in the main wadi, lies on a northwest-southeast axis and is cut into the west side of a large hill that dominates the central part of the Valley. Its plan consists of an open entryway ramp (A), three successive corridors (B, C, D), a chamber E, and an unfinished pillared chamber (F) with central descent, which leads to the burial chamber J. The first corridor B has four undecorated side chambers (Ba-Bd), one of which (Bd) was left unfinished. The first three corridors of the tomb are well cut, but no well-shaft was excavated in chamber E. A corridor following descent F was enlarged to be used as the burial chamber. A two-tiered pit to hold the missing sarcophagus or coffin was cut into the floor of the burial chamber.

KV 6 has one of largest entrances in the Valley. The intention to cut pilasters at the end of the entryway A as well as the presence of side chambers off the first corridor B are reminiscent of KV 11. There is a large two-tiered pit in the floor of burial chamber J. This the last royal tomb in the Valley to have so much of its decoration completed.

The rough unfinished surfaces in chamber F have recently been smoothed over with plaster. Glass wall panels have been installed in corridors B, C and D and chamber E. Abitz, Friedrich.  The Structure of the Decoration in the Tomb of Ramesses IX.  In: Nicholas Reeves (ed.). After Tutankamun: Research and Excavation in the Royal Necropolis at Thebes (= Studies in Egyptology).  New York, 1992.  Pp. 165-185.

King of Upper and Lower Egypt, Beautiful is the Soul of Ra, Chosen of Ra; Son of Ra, Ra has Fashioned Him, Appearing in Thebes, Beloved of Amen